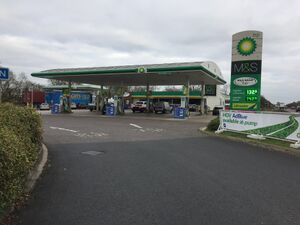 BP (usually stylised as "bp") is one of the world's most famous fuel brands. On Britain's motorways, they are the most common fuel brand: often BP filling stations will be managed by another operator, but there are plenty of forecourts and even whole service areas managed by BP themselves.

The brand has seen many changes, going from the green shield 'British Petroleum' (once majority-owned by the British government) to the Helios 'Beyond Petroleum', and now a new era where they focus on retailing and their electric vehicle charging brand, 'bp pulse'. They have been involved in many initiatives along the British road network, but are currently stuck at a crossroads where the product most closely associated with BP - oil - is no longer fashionable.

The 1980s was an important period for fuel retailing. BP reviewed their estate, and created a new 'mid-range' layout, which would have a large petrol station and space to attach a restaurant. Many of these would be built along new bypasses and busy A-roads.

Meanwhile, now that motorway service areas were only selling one brand of fuel, Mobil had become a common choice for Granada. This was merged with BP in 1996, which substantially increased their market share of petrol stations and also meant that BP is now closely associated with Moto today. The merger also applied BP's branding to Mobil's many A-road developments, some of them very large. 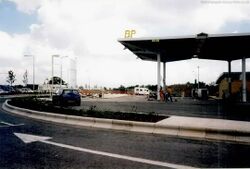 Forecourts which are run by BP (known as 'corporate sites') are known as 'BP Express'. These feature a shop which was originally branded 'BP Express Shopping' in the 90s, but since 2000 they have been known as 'BP Connect' (later stylised as "bp connect").

BP signed a deal with Safeway in 1998, introducing a smaller version of their supermarkets to their forecourts. This was one of the first partnerships of its kind, and was found to significantly increase sales. At least 61 stores were opened, but Safeway's new owners ended the deal in 2005. Rather than split the properties, it was agreed that Safeway would acquire half of the petrol stations involved, for them to sell on.

BP regained full control of the remaining half, and used supplies from Nisa-Today to keep them going, while returning the stores to BP Connect branding.

A franchise agreement was soon trialled with M&S Simply Food stores, under which BP pays for all the goods they sell. This has proven to be very important to BP, as they found that the M&S brand brings even more people into the forecourt. These stores are operated under an agreement which expires in 2030.

BP stores with or without an M&S may also have a Wild Bean Café, BP's own brand of coffee shop.

In recent years, BP have been selling many BP Connect sites to retailers, allowing them to focus on emerging markets.

BP Pulse (usually stylised as 'bp pulse', in keeping with BP's recent phobia of capital letters) is one of the UK's largest electric vehicle charging networks.

In the 1970s, BP were encouraged to bid to run entire motorway services. They bid unsuccessfully for Michael Wood in partnership with Shell, but did win Killington Lake and Anderton. They then decided to lease the main facilities at those two to other operators, though they did briefly run Killington without a catering partnter.

BP had a further stroke of luck in the 1980s, when their existing site at South Mimms was chosen by the government to serve the new M25. BP provided a new forecourt, but leased the main building to Trusthouse Forte. They opened a commercial site at Pont Abraham with Roadchef, and bid for a contract for Clacket Lane but were unsuccessful.

They later took over the full site at Harthill, which they now run entirely on their own. In practice, despite being on a motorway, it looks and works more like a typical BP filling station.

The brand 'BP Truckstops' was launched in 1989, promising "a new standard for truck drivers". Starting with Alconbury, each branch offered parking, a restaurant with meals from £2, and usually hotel rooms from £9.

BP were most likely attracted to the business because HGV fuel sales were a major source of income, so the money spent providing facilities would be made back by the extra custom at the pumps.

As the profit on fuel sales fell, there was less income to reinvest into the sites. After struggling for some time, in 2002 the truckstops that were left became Nightowl.

BP operate at many signposted service areas. They are: [view on a map -  Download KMLrefine search] 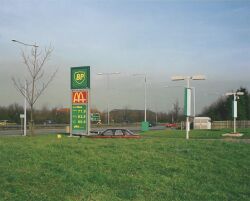 BP used to be found at the following signposted service areas: