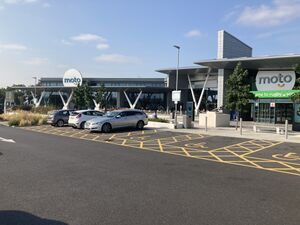 This is the new motorway services on the M6. For the truckstop on the A5, see Rugby Truckstop.

A brand new service area has been built at the bottom of the M6, bringing a touch of the 2020s to one of Britain's oldest motorways.

Prices are paid using NexusPay. The location code is 1664 for cars and 1665 for HGVs. 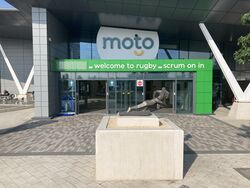 The new amenity building is arranged in a V-shape, with an entrance to the right of the building and toilets to the left. The right hand side of the building contains a Pret A Manger store (originally planned as a Greggs with a separate entrance), a Marks & Spencer Food store and a WHSmith store. Besides Pret is an area reserved for external concessions. The M&S is Moto's trial of a new and smarter trial and format.

In the middle of the building is the Costa Coffee unit, beside an exit to an outdoor courtyard with seating. The left side contains the remaining eateries, namely Burger King, KFC and Greggs. That Greggs had originally been planned to be a large Arlo's restaurant, but Arlo's had been phased out by the time Rugby services opened. As a result, this Greggs has its own dining area, and is the largest on the motorway.

The site is shaped around an existing farm, with the petrol station positioned to the east of it and the amenity building to the west. To the far west, an earth bund doubles up as a nature area, with space for a hotel reserved next to it. The HGV parking area is fenced off from the main facilities, something which had been requested for a while but had never been used at a service area before.

Work had started with the intention of opening in the summer of 2020, but COVID-19 and poor weather delayed the opening to 30 April 2021. The new service area showcased Moto's new corporate branding, with the first major unveiling of Moto's new logo and a brand new signing scheme. To suit the modern building, Moto cut back on their usual advertisements and electronic billboards, and instead furnished Rugby with a range of fountains and a walled garden.

When opening Rugby, Moto drew attention to its high-speed charging facilities, calling it "the UK's flagship" charging service area". It was a £40million investment spanned 25 acres. An official opening event was held on 6 July 2021, which was attended by Rugby MP Mark Pawsey, junior transport minister Rachel Maclean MP and Deputy Mayor of Rugby Chris Cade, where it was described as a "perfect example" of a zero-emission future.

A few miles west at Harborough Magna, space was left for a new service area when the M6 was originally built in 1971. That land was never used and eventually sold.

In 2003 Extra planned to build a service area in the south-western quadrant of J1. Their plan was rejected as it would have contravened the council's policy and would have involved building on green belt land.

Extra had said there was a need for a new service area in this region, and that there was no other suitable site. They also argued that a service area could relieve pressure on the lay-bys along the A426, but the Warwickshire County Council said that Extra hadn't taken this into account in their traffic forecasts.

As part of the plans the J1 roundabout would have been widened and lit. At one stage they agreed to make HGV parking totally free. Extra said they knew the plan would have to be appealed anyway, and they initially sounded positive about the appeal, but ultimately it wasn't approved.

250 jobs would have been created by their plans. There would have been parking for 380 cars, 10 caravans, 18 coaches and 60 lorries, with the potential to expand it further. That land is now used by the Rugby Gateway development.

Moto went public with their proposal in September 2016, which would be built on land owned by Wyggeston's Hospital, which it had been looking to monetise for some 20 years previous. They had been looking to add to their estate for some time, and raised a number of possible new locations. Moto received planning permission for Rugby services in November 2017.

The intended line-up of brands was confirmed in May 2019. This included bp pulse charging points, but these were later removed in favour of Ecotricity's upgraded charging units.