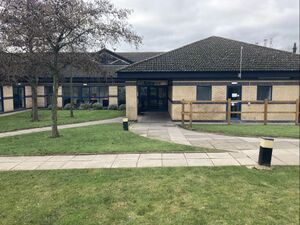 Signposted from the road? From A5 only

A large truckstop on the A5 which is also signed from the M1.

First 2 hours free for all vehicles, after which HGVs must pay £26 per 24 hour period.

Prices are paid using pay machines located within the amenity building, and can be paid using card, fuel cards or SNAP. 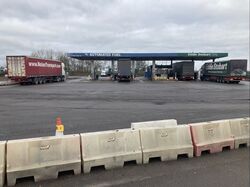 The site started out life as a transport café which dates back to at least the 1970s. Back then, the site was home to the Rendezvous Café, better known as 'Tubby's', which provided overnight parking for truck drivers. Throughout the 1980s, the owners of the café intended to add a hotel and fuelling facilities to the site to increase their custom however by the mid-1980s the café had closed.

Lakeland Investments sold the truckstop to BP in January 1988, along with a sister site at Penrith. BP developed both sites to create 'BP Truckstops' in 1989. The site includes an amenity building in the centre of the site, with HGV parking to the north and fuelling facilities to the south.

BP later sold the site to Nightowl in 2001, who were later acquired themselves by the Stobart Group in 2013. Stobart have since built a new transport depot on previously unused land to the south of the truckstop, with access to the depot provided through the truckstop.