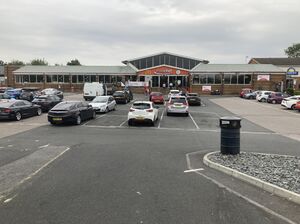 Possibly the most famous service station name in the country - so it's a bit of a shame that it looks no different from most other services. Still, given that it has been there for over 60 years, it's quite an achievement that it's able to keep up with the others.

Prices are paid using NexusPay or in the shop. The location code is 2220 (northbound) and 2237 (southbound). 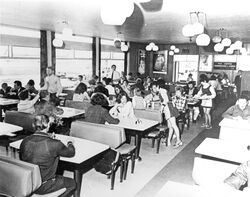 Cramped but popular - the original restaurant.

The traditional 'gateway to the north', Watford Gap probably manages to be both Britain's most famous and most infamous motorway service area. It has also managed to convince the world's press that it's the oldest.

Going right back to the days of The Blue Boar, Watford Gap has seen highs and lows that have all shaped Britain's motoring culture. The name 'Blue Boar' is still used on some internal documents as of 2021.

Watford Gap was still managed under its original operating lease, which was one of very few that were never sold. It had to be renewed when its 50 years expired.

Watford Gap was where Roadchef trialled WHSmith. It was a success and was soon rolled out across all their service areas.

In 2010, a large redevelopment of the northbound services saw a new entrance created, and the restaurant reduced from a large Restbite servery to a smaller Hot Food Co. counter. In 2012, this was changed to Roadchef's trial restaurant Fresh Food Café.

Pizza Rossa was trialled on the northbound side for a short while within the Fresh Food Café unit, but it was discontinued.

Roadchef's first Carvery Express opened here on the northbound side in September 2015. It was removed in 2017 following an unsuccessful trial.

A new LEON restaurant opened on the southbound side on 24 November 2021 in place of the Chozen Noodle unit. The Fresh Food Cafe unit was also replaced with a new Garden Square Deli unit in late December 2021 which offers Chozen Noodle products as well as New York Bakery products.

Western Power Distribution is planning to increase the electricity capacity at Watford Gap, to allow it to potentially become a charging hub in the future.