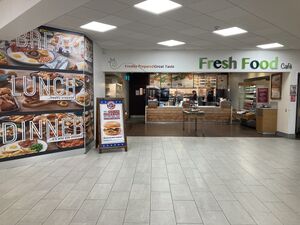 Many more photos in the gallery
Official Website:
www.roadchef.com/brands/fresh-food-cafe

Unlike the traditional motorway restaurant, here all food is cooked behind a single ordering point. This minimises the footprint taken up by the restaurant, reduces the need to queue and avoids the need to put food on display.

From 2008 to 2012, Roadchef had been introducing the very similar Hot Food Co. as their restaurant option. Fresh Food Café was launched at Watford Gap, and became their preferred restaurant styling.

Unlike many motorway restaurants, each Fresh Food Café was accompanied by a significant refurbishment, to create a more attractive serving area. Roadchef were proud to be investing restaurants at a time when their two big rivals were closing many of theirs. Despite this, customer levels were not as high as they would have been in the past, and Fresh Food Café soon found that its opening hours and menu were reduced.

Whereas historically the restaurant was the most important facility at any service area, by the 2010s this role had been taken over by the likes of McDonald's. As a result, the quieter service areas won't be getting a Fresh Food Café, and during most of the COVID-19 pandemic, Fresh Food Café was closed.

Some branches of Fresh Food Café were reduced to be open in the mornings only, where the demand for a cooked breakfast was still strong. With this in mind, a new breakfast-themed brand was created: The Breakfast Kitchen. This has replaced Fresh Food Café at some locations, while others have been scaled back and have effectively been merged with Chozen Noodle.

Roadchef continue to operate some branches of Fresh Food Café until the early evening, which is now very rare for a British motorway café. However some other branches have been closed. Roadchef also trialled a click and collect service with the brand for a time.

Following the opening of The Garden Square Deli as a unit in its own right in the summer of 2021, this is now likely to replace many Fresh Food Cafés.

Fresh Food Café has been removed from the following service areas: