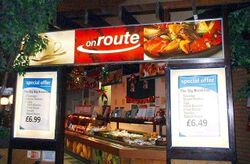 An example of a short-lived restaurant name.

Own-brands (or self-brands) are names created and managed by the company running them.

The most common alternative to an own-brand is a franchise, but with own-branding the owner is able to take all the income from sales. A successful own-brand could also be used to promote the company that own it.

In the early days of motorway services, they were almost entirely made up of own-brands. Many operators have found these to be toxic, as they become tarnished by the poor reputation of motorway services even if they were actually pretty good. Initially, this was tackled by regularly changing names and styling. Today, franchising, licensing and leasing units are more popular solutions, as it allows the use of more popular names and avoids any development work.

Despite this, own-brands continue to be found at a lot of service areas, and there have been some success stories. Westmorland is probably the most well-known example.

Some more recent examples of own-brands: