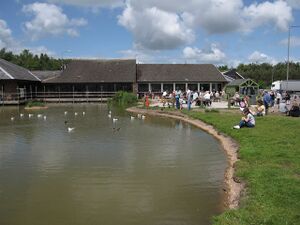 Westmorland is a family-owned service area operator. They shun big brand names and instead work with local producers, creating some of the UK's most talked-about service areas. They are now the UK's only significant independent operator.

As the Dunning family were farmers themselves, Westmorland's ethos is that each site should be rooted in the local community, selling food that is locally-sourced, and gifts which were created by local suppliers. New projects tend to be created in partnership with local charitable causes. Each service area is promoted on its own merits and ironically that means many of their customers will talk about Tebay and Gloucester without ever realising its Westmorland who run them.

Both of their qualifying services were among the first six to be given five stars by VisitEngland. In 2019, Transport Focus graded Westmorland 98% for customer satisfaction, putting them well ahead of every other operator. In 2021, Which? Magazine awarded all three top spots to Westmorland's service areas.

The Westmorland business was especially vulnerable during the COVID-19 pandemic, as their restaurant experience is arguably their most famous feature. During the lockdown, they adapted to sell pre-packaged products and more takeaway food. They also offered interest-free loans to staff who needed financial support, and were praised by some of their suppliers for the understanding they showed.

High Chapel Farm was one of hundreds of farms which lost some of its land to the construction of the M6 in the late 1960s. It was lucky that a motorway service area was proposed at Tebay, and even more lucky that all of the existing operators had turned it down. Desperate for somebody to come forward, the Department scaled back their proposals, and as a result this was now one of the only service areas which were affordable for a small firm to take on.

The Dunning family, who had been managing High Chapel Farm, decided to take a gamble and branch out from farming to service stations. Tebay initially had to focus on fuel sales and the owners struggled to compete with their larger rivals, but as food sales became increasingly important, the family's unique background led to a major success story. As all the other operators merged and battled to have the biggest brand names, Tebay increasingly stood out as an anomaly; a place which was happy to do things on a smaller scale if it meant better quality. This really took hold when the farm shops opened in 2003.

The company's growth was slow and steady, but 42 years later in 2014 they made a huge leap by opening the first part of Gloucester services, and acquiring the independent Cairn Lodge. Both of these now follow the ethos made famous at Tebay.

Until 2014, Westmorland's business was focused on Cumbria, and Tebay made up the majority of their work.

The opening of Gloucester and acquisition of Cairn Lodge changed that. Squad created a new umbrella theme to connect all the Westmorland sites. This involved promoting each site under its own name (but all part of the 'Westmorland family'), while using the same fonts and colours.

As all the other operators were changing their names to be able to advertise their facilities on the motorway, Westmorland used a logo that read "Westmorland - farm shop". On the new motorway signs, they no longer refer to themselves by name at all, but instead as "FARMSHOP AND KITCHEN". As they don't use any food franchises, they have no franchises to promote.

The following service areas were planned by Westmorland but they were never built: