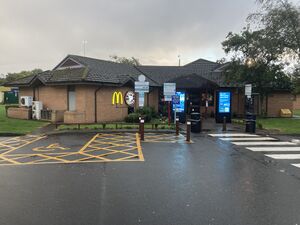 M74 northbound between J5 and J6

A small service area on the northbound M74 just before it gets to Glasgow. Roadchef have an alternative for southbound traffic, Bothwell.

Prices are paid using NexusPay or in the shop. The location code is 2039. 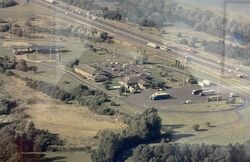 When they opened, Hamilton and Bothwell were treated administratively as if they were one service area. On this website their two names mean they are each counted individually.

The site occupies very large grounds considering its relatively quiet usage. The large grass patches between parking areas, lengthy approach roads and view over the lake could make it one of the greenest (in the literal sense) motorway service areas in the country. This remains true despite the addition of a hotel and a drive thru coffee shop, but the fact goes almost completely unnoticed.

The long entry roads are necessary because of the nearby junctions and limited land available, but it does create a grand and scenic welcome that its namesake Hamilton Palace would approve of.

Roadchef have been known to place advertising hoardings on the rear access that connects to Mausoleum Drive. This does suggest that, despite the "no access" signs, they expect a lot of members of the public to be using it. It is also possible to use this road to walk between the service area and Hamilton Palace Park.

"Hamilton has given us considerable trouble."
Scottish Development Department, 1973

The land was designated for use as a service area when the M74 opened in 1966. A very large plot of land was allocated, as the Scottish government were keen to avoid the overcrowding problems that the early English motorway service areas had encountered.

Bids were received from two developers, of which Highway Restaurants Ltd (which consisted of Blue Star and Trust Houses) won. The Department for Transport laid the roads out (including 50 HGV spaces and 10 coach bays), but Trust Houses pulled out their support leaving Blue Star to run it on their own. A revised financial offer was accepted in December 1967.

Blue Star reported "severe financial difficulty", and cancelled the project in August 1969. This left the Scottish Development Department with a half-built service station that was too far advanced to give up on, even though that was tempting. A new round of bids was opened for Hamilton in August 1972, and no responses were received at all.

The Scottish government went back to 15 potential operators, and received four responses from Trusthouse Forte, Westmorland, Granada and Galleon. Operators would now be allowed to sell one brand of fuel, but the government would no longer be involved in site maintenance. The Granada proposal's 250-seat café was too big, and would clearly be unused. Westmorland would have had a 100-seat café, and Trusthouse Forte proposed a 104-seat café and an 88-seat restaurant.

They took up the Galleon offer, which would be branded 'Roadchef'. Roadchef wanted it to be as cheap and easy to build as possible. They built a largely glass, 120-seat self-service café with an orange and cream colour scheme. They said this was combining the best elements of other service areas, creating a modern site. 12 toilets were provided. Financially, the Scottish Development Department accepted that this was a "poor return", but "this is the best offer we have been able to realise".

Roadchef confirmed it was designed with long-distance traffic heading across Scotland in mind, with drivers being encouraged to park up for the night and make their way to hotels in nearby towns. It opened on 20 June 1975, although an official opening event was held on 22 September 1975, which was attended by the Scottish Lorry Driver of the Year. Fuel was provided by Texaco, with the forecourt operated by Roadchef.

By 1978, Hamilton was known for its poor design and heavy vandalism, and was soon replaced by a less flimsy-looking structure in a new position. It opened with a new Orchards Restaurant, and fuel was branded BP.

Hamilton is slightly busier than its sister Bothwell, and as a result it has always fared slightly better, with a few more facilities.

A tourist information centre was opened in 1988. When the lodge was opened in 1989 it was described as "a new era for travellers", aiming to provide a much higher quality than someone might expect from a motel. It cost £750,000, and was designed to overlook Strathclyde Park.

In 1996, Hamilton was due to get a drive thru Wimpy, but this never happened and Hamilton spent much of the next 15 years being one of the UK's only motorway service areas without a fast food restaurant.

Despite the new era for travellers, Roadchef nominated Hamilton as a candidate to be sold when they faced financial difficulties in 2009.

The forecourt was sold to Euro Garages in early 2017, as Roadchef was removing fuel from their business model. It was rebranded from BP to Shell at this time. The forecourt has an abandoned area behind it, probably related to the previous site layout.

The Costa Drive Thru, opened in 2017, remains the only drive thru coffee shop on Scotland's motorway network.