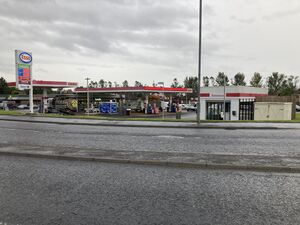 A pub, hotel and petrol station at the Bellziehill Junction on the main link road between the M74 and M8.

Parking within the Brewers Fayre and Premier Inn shared car parks is free for customers and hotel guests only and you must give your vehicle registration number to either the bar or reception staff to receive this.

Parking for non-guests is chargeable and can be paid via the YourParkingSpace app using location code 10055. 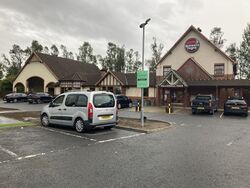 Plans for a service area on the site of the former Bellziehill Farm were first proposed by Gulf in 1996. Planning permission was granted for a filling station and drive-thru restaurant with a section of land also dedicated for mixed and commercial leisure use.

Upon opening, Esso were the ones who provided the fuel with one of their Snack & Shop stores and McDonald's providing the drive-thru restaurant, both opening in 1998. The land dedicated for the mixed and commercial use was also developed around the same time with a 40-bed Travel Inn hotel and the Bellziehill Farm branch of Brewers Fayre opening here in the same year. The restaurant also included a 'Fun Factory' indoor soft play area.

The Premier Inn gained a 20-bed annexe in 2010, built on the existing car park. The drive-thru lanes of the McDonald's restaurant were also re-configured in 2010 adding an additional order point.