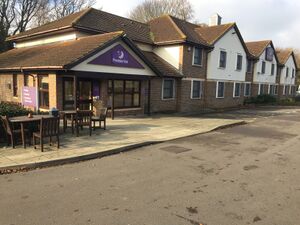 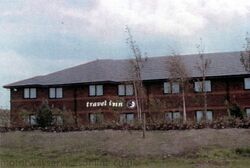 Premier Inn is the most valuable of Whitbread's brands, being responsible for the majority of their turnover.

Travel Inn was a brand created by Whitbread, and it stayed with them ever since. It was founded in 1987, to give Whitbread a foothold in the new budget hotel market which was being dominated by Forte's Travelodge.

Like Forte had been doing with Travelodge, Travel Inns were opened next to existing Whitbread restaurants, such as Beefeater. These were generally in more urban locations than Forte's Little Chef. Travel Inn became the largest budget hotel brand in the UK, but customers were regularly confusing it with its rival.

In 1995 Whitbread agreed to purchase Travelodge from Forte, as well as the restaurants attached to them. This deal, which could have seen the two hotel brands merge, was scuppered by the Granada takeover of Forte.

In 2000, Roadchef replaced their own Roadchef Lodge with the Travel Inn brand.

In 2004 Whitbread acquired Premier Lodge, and created a combined brand, Premier Travel Inn. Premier Lodge was the UK's third-largest budget hotel operator, generally focused on smaller locations in town centres. This was solidified in 2007 when the new name was formally shortened to Premier Inn. One reason for the new name was to help customers understand that they were totally different to Travelodge.

In 2005 Premier Inn purchased a number of hotels from Holiday Inn. These were generally sites attached to pubs, which had been run under the Holiday Inn Express title.

In September 2010 Roadchef ended their relationship with Premier Inn, citing poor sales. This change inadvertently helped Premier Inn move their image away from that of old lodges next to motorways, and towards refurbished buildings in city centres and near airports. This has been the focus of Premier Inn's expansion.

Premier Inn used to operate at: