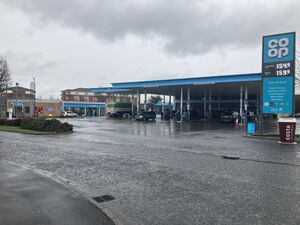 A59 at York Business Park

When the York Northern Bypass was built, roundabouts were provided to support a number of developments. One of these allowed for the York Business Park, which is recognised by the highway authority as a service area.

The service area and business park were developed during the 1990s. The majority of businesses opened in 1997, including the BP filling station, a Brewsters restaurant and the Travel Inn hotel which make up the signed service area. The restaurant and hotel both went onto become Brewers Fayre and Premier Inn respectively in around 2005, with the restaurant changing again to a Beefeater in 2018.

OK Diner had also planned to build a restaurant on the business park, but it was refused and eventually opened as The Wetherby Whaler.

The forecourt, which is the main facility here, is officially known as 'Spaceways'. The meaning of that name is not entirely clear. The filling station was acquired by The Co-operative Group in 2009 who added their Co-op Food store to the existing BP forecourt. This was rebranded to Texaco in 2013, retaining the Co-op Food store, before becoming just a Co-op filling station in 2018.