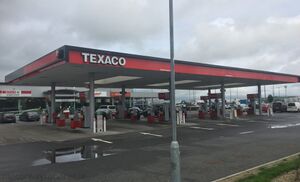 Many more photos in the gallery
Official Website:
www.texaco.co.uk

Texaco is the petrol forecourt brand of Valero. They still maintain a presence on A-roads, but most of their sites on motorways have since been rebranded.

In the 1990s, Texaco partnered with Swayfields to develop a number of motorway service areas, including Baldock and Peterborough. Texaco fuel was also sold at Extra's Gold Star service areas.

Texaco's own brand of shop is 'Star Market'. It was once widespread and well-advertised, causing their forecourts to be nicknamed 'Star Garage', but most have now been removed. Smaller snack and essentials shops are branded' Express Shop'.

Instead, most sites use a franchised name, such as Londis, Costcutter and Mace.

Texaco operate at some service areas, mainly on A-roads. They are: [view on a map -  Download KMLrefine search]

Texaco have pumps at each of the following Welcome Break petrol stations. This is a legacy of when these service areas were part-owned by Blue Star:

Texaco has been removed from the following official service areas: