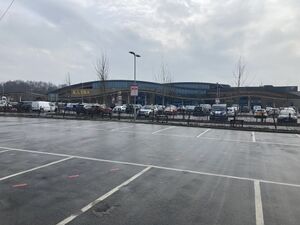 In March 2020, a brand-new motorway service area quietly opened at Leeds Skelton Lake. Over the following summer, more partners slowly moved in, and now the building is fully occupied and catering for both passing motorists and nearby residents. 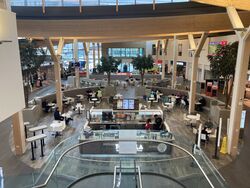 Although Leeds Skelton Lake calls itself a service station, the documentation made it clear that it intended to attract customers from a new housing estate being built opposite. Until 2013 this wouldn't have been allowed, but changes to the planning laws do now allow service stations to do several jobs at once.

It was the first completely new motorway service area to open in almost six years. Some architectural progress had been made in that time, and the new building took all the successes of Cobham and Beaconsfield and mixed the environmental work done at Gloucester to create what it deemed to be a "new concept". Its natural features like its grass roof, tree-lined approach roads and the access to the lake have become the place's main selling point. The charging points are powered entirely by renewable energy, and there is a wildlife and visitor centre here too.

While it doesn't blend in with its surroundings quite as much as Gloucester does, as Leeds is bigger, busier and more corporate, it still feels much more 'at one with nature' than most service areas. Inside there is a central area with four kiosks, and an additional nine units around it, with a two-storey hotel joined on. Glulam timber louvres furnish the appearance of the green-roofed building, which was designed by Corstorphine + Wright and constructed by Morgan Sindall.

This is the only motorway service area to genuinely have two names. Its promoters couldn't decide between 'Leeds' or 'Skelton Lake', so they took both. A combination like that hasn't been seen since Washington-Birtley in 1970.

The new brand partners are very similar to what's offered by Welcome Break, with a hint of Roadchef. Many of them are operated by SSP, including new retail and takeaway brand Urban Express. London-based ethical farmers market Sourced Market recently announced they will be at the services, which Extra revealed was a partnership inspired by Westmorland.

As with all motorway service areas, the restaurants at Leeds Skelton Lake offered a number of indoor dining options during the winter 2020 COVID-19 lockdown. At Leeds in particular, this caused considerable tension, with a number of social media users and online news website claiming that large gatherings of local people and family reunions were taking place here. Others celebrated the availability.

Extra did place notices advising that only those making an essential long-distance journey could eat on-site, but there was little they could do. In March 2021, Leeds Police began making unannounced visits and advised that anybody who felt the service area offered a loophole in restrictions was mistaken.

The amenity building had proposed to feature a Mi Casa Burritos kiosk however due to the coronavirus pandemic this never opened. The unit was later taken over by Tortilla in summer 2021.

The motorway here only opened in 1999, opening a new corridor for development and for services. Between 1997 and 2005, Extra had several plans for a service area and a Travelodge here rejected. At the time the junction hadn't opened: it had been delayed and didn't open until 2009. This had a similar layout but with a smaller building and closer HGV parking.

The missing junction was the main reason the service area wasn't built when the Secretary of State was called in to consider five proposed service areas in the Yorkshire area in 2005. He said that there was a "pressing need" for a new service area, and the problem with Skelton Lake (called Skelton Grange at the time) was that it couldn't be built quickly. This, and the fact it was too far south of the existing services, meant the plan was refused even though the Secretary of State was impressed by Skelton Lake's job opportunities and limited environmental damage.

By the time the East Leeds Link Road was finished, Extra were encountering their own financial difficulties and didn't make any proposals.

In Spring 2016, Extra submitted a new £50m plan for a service station here, creating 300 jobs. It was hoped that this would be open by Autumn 2017. They had been, for the previous few years, been fighting for permission to open services down the road at Sheffield too.

In October 2016, the proposals were approved in principle by Leeds City Council. Further approval was granted in March 2018 with an expected opening date in summer 2019. Extra awarded the filling station contract to Jos Richardson and Son, who will operate it as Texaco and SPAR on behalf of Valero, in what Extra called "an important new strategic relationship".

The opening date slipped back several times, with the petrol station finally opening on 30 March 2020. The main facilities remained closed due to the ongoing COVID-19 pandemic, with the first few facilities in the main building opening on 1 July 2020. As COVID-19 lockdown restrictions eased, more facilities opened during July and August 2020.