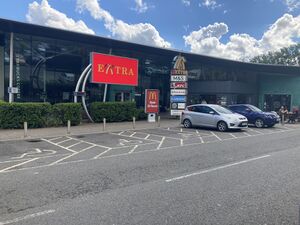 A service area at the bottom of the M40, filling a large gap between the existing services. For a while it was the highest-rated motorway service area on this site, with an impressive four-and-a-half stars after a record-breaking number of votes (see above for the latest figures). 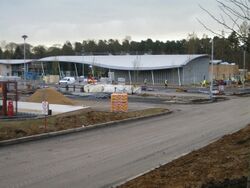 When it opened, Beaconsfield was treated by many as the only late-night meeting point in the area, which has caused issues. It now has a dedicated police community support officer on site for crime prevention. Extra contribute half of the cost of the officer, backed up by security guards in the evenings. In 2019, Thames Valley Police commented that the service area creates a lot of work for them.

It described itself as "one of the most attractive service areas in Europe", with a lake and a terrace around the back of the building.

The large amenity building has an upper floor area which is used by Extra as a head office, which they moved to from an address in Lincoln.

President Trump's motorcade (without Trump) visited the service area to fill up with fuel during Trump's 2018 visit to the UK.

When the M40 first opened between London and Oxford, a service area was proposed at Abbey Barns. This site was never needed, but when the M40 was extended to Birmingham in 1991, this became a major issue. Buckinghamshire and Oxfordshire argued over which county should have to have the service station, and an inquiry ruled that Oxford services should be built specifically because it leaves space for another new site in Buckinghamshire.

In 1994 the first plan for Beaconsfield services was submitted, under the name Burtley Wood plan. It was immediately unpopular due to concerns about it being built on green belt land, and because of concerns about the exit crossing the A355. Further up the M40, there had been serious traffic problems caused by the junction at Cherwell Valley services.

The Burtley Wood plan was set for an inquiry in 2000, but this was adjourned because a rival proposal at Hedgerley needed to be investigated. The two were included in the 2002 public inquiry, along with other service areas proposed along the M25 and the M4. This ruled that the road from Oxford to Paddington should be treated as one, and that it needed a new service area. It came down to Hedgerley against Burtley Wood, and in 2005 the inquiry ruled that Burtley Wood would do less environmental damage and should be built.

The service area was scheduled to open in September 2008, but this was pushed back to 17 March 2009. It opened under the name Beaconsfield services. An official opening event was held on the 28 May 2009.

Upon opening it became Britain's biggest service station - Cobham has since beaten it.

There are 675 car parking spaces, 60 HGVs, 12 caravan spaces and 15 for coaches. There were suggestions that the services could feature a park-and-ride site to appease local residents, but this didn't happen.

Shell have trialled a number of ideas here with a short-lived Pizza Hut Express offering being added in early 2017, alongside a new Costa Express machine and a new Deli2go hot food station. This was later replaced in late 2018 with their deli by Shell offering. In March 2018, the forecourt also became the UK's first integrated petrol-diesel-hydrogen filling station. The hydrogen fuelling station was later decommissioned in October 2022, with Shell describing the technology within the refuelling units as coming to ‘the end of its life’.

The Mint Leaves unit was replaced by WrapChic in June 2018, which itself was later replaced by Tapori in autumn 2019, along with their other branch at Cobham.

Carvery Express closed in 2019 to make way for an extended Chozen Noodle unit.

A Changing Places toilet was also introduced to the main building during May 2019.

The first LEON restaurant at an Extra service area opened here in February 2020. It is situated in the former space occupied by Patisserie Valerie and is operated by SSP.

The El Mexicana kiosk was refurbished in March 2022, reopening with an additional Don Churro option.

The opening of the JD Wetherspoon pub 'The Hope & Champion' on 21 January 2014 caused considerable outcry, due to the conflict between it being a pub and a motorway service area. In practice it trades mainly on JD Wetherspoon's reputation for cheap food, but the alcohol is there for passengers or hotel guests who want it.

To date this is still Britain's only official motorway pub, although there are plenty of pubs near motorways. There was once a fully branded up pub at Trowell, but that one never served alcohol.

During the late stages of the COVID-19 pandemic, The Hope & Champion was in a unique position where it was able to use the clause that motorway service areas were exempt from the 10pm curfew on restaurants, allowing it to become the only pub in England which was still open to customers at that time.

In September 2022, it was announced that Wetherspoon plan to sell the Hope & Champion, and that the pub is currently on the market.