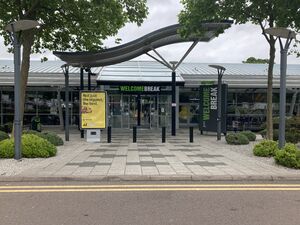 A busy service area at a busy roundabout, consisting of a large building with car parks and neighbouring facilities sprawled across much of the local area. It is a rare example of separate facilities being provided for cars and HGVs, both operated by the same company.

Cars and coaches can access the main facilities, but HGVs cannot.

The South Mimms Truckstop is only accessible to HGVs.

Separate parking is provided for cars, coaches, HGVs and caravans.

Inside the large amenity building, pictured in 2003.

The service area's site comprises of several businesses and units, including a council depot. The only sensible route between the motorways and the village of South Mimms is to leave at the junction and drive through the service area, where there is a link road to the village. This feature is pretty much exclusive to this service area.

The fire meant between 1998 and 2013 it was both the oldest and the newest service area on the M25. Its dedicated HGV facilities meant South Mimms was often included in truckstop guides, where it boasted 200 HGV parking spaces.

Six more electric vehicle chargers were added in May 2022, under their parent company's brand, Applegreen Charging. Early drawings suggested the Welcome Break brand would be used. Either way, it represents a change from motorway service areas normally outsourcing their charging facilities to third parties.

The services are off a busy roundabout, however its location presents an even bigger problem for the police. Over time, several illegal activities have been uncovered here, largely due to its location being where two major routes cross, one coming out of London (where South Mimms is the first service area you'd pass) and one heading towards the Channel Ports.

National Cycle Network route 12 runs along Wash Lane, behind the service area building, with a gate for cyclists to access the facilities. This is an unusual feature for a motorway service area, but unlike the footpath at Severn View, at South Mimms the facility isn't advertised to cyclists.

The gate is actually there to provide customers with access to Wash Lane Common Nature Reserve. Hertfordshire County Council have been working to promote and improve the nature reserve, in turn improving the view from the service area. This puts South Mimms in the unusual position where it offers a break to people who are out for a leisurely stroll.

A new building was added next to the hotel in April 2016, which was planned to become a Frankie & Benny's, but opened as a rare example of a franchised Ed's Easy Diner. The trial brand represented Welcome Break's efforts to increase their share of the restaurant market. The store closed in April 2018, and reopened as a PizzaExpress on 8 June 2018.

The motorway network's first Pret a Manger opened here on 24 August 2016. It is operated under a contract which expires in 2025.

In the Public Eye

The services were mentioned in Ian Sinclair's book 'London Orbital', which came to the conclusion that it was dire and in need of a refurbishment, with traffic queueing to leave the site and join the main junction. A few weeks later, he said things had improved. They also starred several times in Sky's 'Brainiac: Science Abuse' and 'EastEnders', and Robbie Williams has sang in the car park.