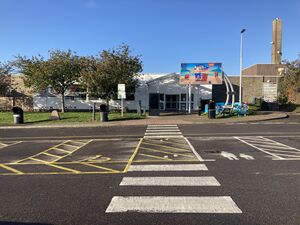 Signposted from the road? Yes (as Costa/Burger King from M48)

Extremely windy and extremely small, Severn View is what's left of the facilities for those who still use the Severn Bridge.

Despite its name, it is not actually immediately adjacent to the bridge, the river or the motorway junction, though it is connected to all three by public footpaths.

First 2 hours free for all vehicles, after which cars must pay £15 and HGVs, caravans and motorhomes £23. HGVs can pay £26 to include a £10 food voucher.

Prices are paid using PayByPhone. The location code is 2460. 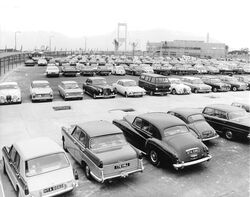 The original services building, in 1966.

The service area has changed a lot since it opened, when it was known as 'Aust'. Back then it could be found at M4 J21 and was positioned much closer to the landmark. Its history has all the details.

Although the service area was renamed in 1993, during the 2021 fuel crisis, the national highway authority displayed the name "Aust services" on all their electronic signs. The policy does say that it should be called "Severn View".

Despite its small size, GRIDSERVE chose Severn View as the location of one of 11 new electric vehicle charging hubs in 2022, with six high-powered chargers going live in June 2022, alongside the existing medium power ones. Space was left for additional chargers to be provided if the demand rises.

The current amenity building is a very simple structure (an old transport café) that is arguably the smallest of any motorway service area in the UK, depending on a few technicalities. What Severn View does have is just one shower facility as part of a small washroom area, a tiny shop in the middle, and a small dining area. The walk to the toilets is only a few metres and takes you past all the facilities that the service area offers.

Its small size was one of the factors in Transport Focus calculating a 72% satisfaction score in Spring 2019, making it the worst site in England. Moto explained that they would be focusing improvements on it over the following year. By the next survey it recorded a middling 89%.

Moto have held planning permission to build an external Greggs store in front of the service area building since February 2020. Construction was never pursued as they were looking at introducing the Greggs into the existing dining area instead.

Moto are also hoping to build a new Changing Places facility next to the entrance lobby. 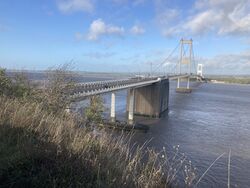 The view of the Severn Bridge from the viewpoint.

While it may not offer many facilities anymore, the service area is still probably the best place to park before walking across or viewing the Severn Bridge.

By walking on the road out of the car park, visitors will find a path which ends at a viewpoint and plaque (which is in a very poor state). It also provides stepped access to the southern side of the bridge (the turning is opposite the petrol station and easily missed). These are part of the Severn Way public footpath, which extends along the river in each direction.

Access to the northern side of the bridge is at the other end of the path, from the large roundabout, which is more accessible.

Sightseers should be wary of the two-hour free parking limit, which is unlikely to be long enough to walk all of the bridge. Parking options are detailed above. The Travelodge car park is an alternative option that is closer to the viewpoint and field (without crossing any roads), but it's further from the facilities and the same time restriction applies.

The southern side of the bridge is designated National Cycle Network route 4, as well as routes EuroVelo 1 and EuroVelo 2. Signs on this path direct cyclists to the "service area". Although this referred to the old building, it does mean that Severn View can boast that it is the only motorway service area to officially serve an international cycle route and a long-distance walking trail.