Busy services positioned on a busy junction. Like all M5 service areas, Gordano will struggles under the summer holiday pressure, but its large building and surroundings means it copes fairly well - until you try to get back on to the roundabout. 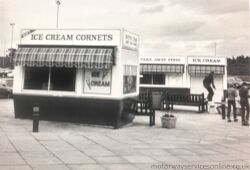 The restaurant was carpeted, with bench-type seats and a Scandinavian-style strip-wood ceiling. An unusual layout within the toilets area means there is a separate entrance and exit, with the way out directing people into the food court.

Shortly after opening it gained a snack bar and AA shop in temporary buildings, and before long had a total of eight temporary buildings, including a St John's Ambulance building, scattered around the entrance. This was severely criticised for looking untidy. Some of the buildings were never removed, and in more recent years more outdoor stalls have been added to help manage the summer rush.

Gordano was the second service area to be built at a junction. With a large viaduct to the north and a split-level section of motorway to the south, there were very few alternative sites for a service area available, and the Department of the Environment considered building at a roundabout to be better than trying to build in a difficult location.

Today this junction suffers from severe congestion, especially during the summer months, and the road layout has been changed many times to try to deal with it.

Rank were allowed to bid for the service area despite them already running Aust, because not much traffic was expected to come from that direction. Taverna remained forbidden as they already owned Leigh Delamere.

In planning this site was sometimes referred to as Portbury services, while the government usually called it Easton-in-Gordano services.

A new forecourt was provided in 1991.

The site got top marks in Holiday Which? Magazine's survey in 2006, it was said to have "stylish toilets" and the food was "as good as a local curry house". The toilets had cost £1,000,000 as part of a recent refurbishment scheme. Gordano was still beaten by Tebay on the M6.

The Starbucks drive thru was the first new-build drive thru coffee shop on the motorway. It replaced an old workshop building which was going to be re-used and turned into a KFC. That plan was changed to make it the service area's fourth (at the time) Starbucks counter, with its own seating area, but the workshop was in too poor a state to invite customers in to and had to be re-built.

During summer 2018, the former Days Inn hotel underwent a major refurbishment, rebranding to Ramada upon reopening. A large extension was also built to add more rooms, a new restaurant and bar and a fitness suite. This replaced a dedicated picnic and walking area in the woodland.

In 2021, Which? Magazine ranked Gordano as the second-worst service area in the country, criticising its range of facilities and poor social distancing measures.

A Ben & Jerry's kiosk opened here on 16 July 2021 in a new outdoor seating area but was removed that winter.

During early 2022, the site received several refurbishments which included bringing The Good Breakfast unit inside, re-utilising the former Harry Ramsden's unit. The WHSmith store was also refurbished, reopening on 25 March 2022 with its 'premium' upgrade including new ranges and a food to go area, which includes a new The Good Bakery hot food cabinet and f'real Milkshakes and Slush Puppie machines. The KFC unit also underwent a refurbishment and reopened on 1 April 2022.

The Good Breakfast relocated back outside in early July 2022 to allow for works to commence on converting the internal unit into a hybrid unit, introducing Chopstix Noodle Bar to the site. The Good Breakfast relocated back inside on 22 July 2022 with the external unit becoming a Chicago Town Pizza kiosk. The Chopstix part of the hybrid unit later opened on 20 October 2022.