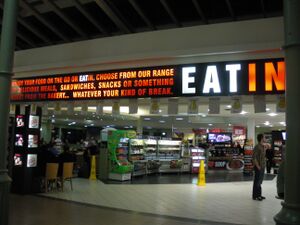 EAT IN was Welcome Break's own name for their restaurant. Even though it was used during the period where motorway restaurants fell out of favour, Welcome Break put a considerable amount of effort into building and promoting it.

It was created as part of Fitch's new look for Welcome Break, using the same old fonts and dark colours that they had recommended for the main Welcome Break logo. Rather than just being a repaint, new promises were made about their food, with promotional material claiming that most menu items would be cooked-to-order on-site.

Food was sold either for eating in the dining area, or in cardboard boxes to be taken away. EAT IN moved towards having smaller counters where food could be ordered, instead of leaving it out on hot plates. Their most popular meals were breakfasts and fish and chips, and it was also launched with a section called THE BAKERY and a 'premium range' of meals.

Welcome Break were so proud of EAT IN that in 2007 they signed a six-year contract to provide the catering at the Eurotunnel UK Terminal, which they did under the EAT IN name (amongst others). They were reportedly looking at taking it to other places away from the UK motorway network, including the French terminal.

A stranger crossover occurred in 2012, when Welcome Break leased a unit at Extra's Cobham services, which they used to provide an EAT IN restaurant. EAT IN was now effectively a restaurant chain in its own right.

As a motorway restaurant it attracted a number of criticisms, but still received generally favourable feedback. Offers included a free kid's meal with adult purchases, and cooked breakfasts for £1.99.

In an era where operators were losing interest in motorway restaurants, EAT IN was a surprisingly strong brand. However, there was evidence that Welcome Break were losing faith in it.

Welcome Break stopped using Coffee Primo, which had a stand in each EAT IN restaurant, in 2008. This was replaced with Starbucks, which over time took more and more prominence in the restaurant area.

The pizza menu was boosted in 2012 in partnership with Papa John's Pizza, who gained their own counters in the restaurant area. This took more attention away from the EAT IN brand, which was given a new logo but often outshone by it's two American partners.

By 2013, refurbishment schemes were tending to take space away from the restaurant area, giving it to other brands. The remaining dining areas were often left looking unloved as a result. Later that year, Welcome Break announced that all their restaurants would be replaced by Harry Ramsden's, Papa John's Pizza and Subway.

The removal wasn't completed until June 2015. At Derby services eastbound, the restaurant was not replaced, but most EAT IN signs were removed. The restaurant at Derby eastbound finally closed in 2018.

Eat In used to operate at: