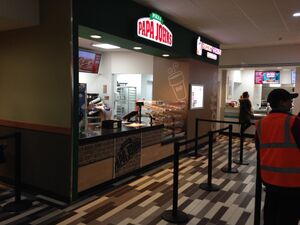 In Ireland, the Papa John's brand is owned exclusively by Supermac's, who include it at their busiest restaurants. In 2014, Supermac's started building their own services, and Papa John's has been included as part of each one.

On Great Britain's motorway network, Papa John's were first incorporated into Eat In restaurants at some Welcome Break sites. They served 'made-to-order' pizzas within the restaurants. In February 2014, Papa John's at Oxford opened in its own outlet, but was replaced by Tossed.

Welcome Break felt that Papa John's was an "emerging brand", which would soon be popular across Britain.

Throughout 2014 and 2015, Welcome Break closed all their Eat In restaurants, and this affected several Eat In/Papa John's combination sites. Papa John's made a swift comeback though and was incorporated with Dunkin' Donuts at Welcome Break locations since March 2015 selling doughnuts and coffee as well as pizza.

However, in January 2017, all Papa John's Pizza outlets at Welcome Break sites were closed permanently. The site at Cobham lasted a bit longer though, and closed in April 2018.

Papa John's Pizza can be found at the following services: [view on a map -  Download KMLrefine search]

Papa John's Pizza has been removed from these services: