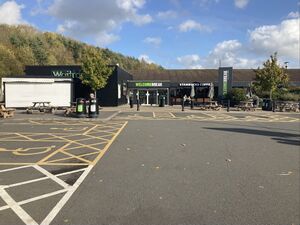 Two small service area buildings staggered along the M5 in a small strip of woodland. 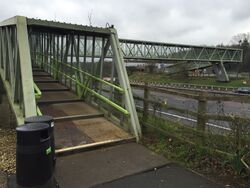 The old footbridge before it was removed.

The majority of the paperwork for this service area had it spelled as "Michael Wood", which is the name of the surrounding woodland. This gave rise to a theory that it was named after somebody, such as the TV presenter with the same name.

Welcome Break changed their internal spelling to "Michaelwood" in around 1991. This matches the name of a nearby farm, which was originally called "Micklewood" - the correct pronunciation. Heston is now the only service area to share its name with a TV presenter.

Michaelwood's footbridge between the two sides was removed in 2018 due to safety reasons after being in place for 40 years. The bridge was owned by Highways England and was removed over the weekend of 25 January 2020. Strictly speaking the bridge wasn't a public right of way, so there was no rush to replace it. A £3.2million replacement bridge was eventually installed during an overnight closure of both carriageways on 2 July 2022, and it reopened to the public in October 2022.

Michaelwood was originally envisaged as a small, temporary service area - but it expanded from there. The forecourts are managed by BP Express and not Welcome Break, as a result of the service area's previous owners.