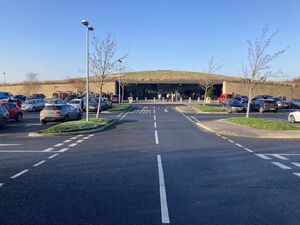 Gloucester likes to do things differently, and with its careful landscaping, farm shop and butchers counter, the place developed its own cult fan club. The owners work with a local charity, the Gloucestershire Gateway Trust, to invest back in the local area, and the majority of their food and goods are made locally.

First 3 hours free for all vehicles, after which cars must pay £12 and caravans, motorhomes and HGVs must pay £23 to include a £5 food voucher.

Prices can be paid for at the Farm Shop or filling station, with instructions in each car park. 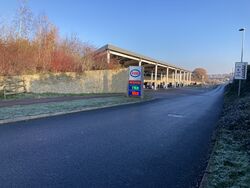 Gloucester services was conceived as a sister project to Tebay services in Cumbria. Whereas Tebay's heritage could be traced back to the family-run farm beside the motorway, Gloucester wouldn't have this backstory, but Westmorland wanted to maintain their reputation for supporting and showcasing the local community. They set up the Gloucestershire Gateway Trust to help with these aims.

Gloucester's unique architecture has the buildings all built-in to the surrounding landscape. Both of the fuel sales buildings are to the west of the access road, to allow for large east-facing windows. Outside, a lot of natural landscaping is used, and there is a little-known gravel path which allows people to move between the two sides.

During planning, the service area referred to as 'Gloucestershire Gateway', while the Highways Agency preferred 'Brookthorpe'. Regulations require a precise name to be used publicly, so upon opening it became 'Gloucester services'.

A six-part documentary series about Gloucester services has been commissioned. 'A Cotswold Farmshop' will be based on the programme about Tebay, and will look at the staff and community around this service area.

A service area in this location was proposed by Roadchef in 1994, but that plan was overthrown. Other sites around M5 J12 had been considered, and Bryant (Central) had a plan for a service area at M5 J11A rejected in 2001.

Westmorland came forward with a new plan for a service area to be built on the 1994 site. This promoted strong local objections: residents said the area of outstanding beauty and archaeological heritage should be protected, and they doubted the grass roof concept would make much difference. They formed the Campaign Against Motorway Service Areas (CAMSA).

One of Westmorland's key arguments for building a new service area was that the gap between Michaelwood services to the south and the end of the M50 was too far. The objectors pointed out that traffic would be unlikely to take that route, but the Highways Agency made the weak conclusion that the rules were valid regardless of whether anybody ever heads that way.

The Highways Agency did raise concerns with the proposal's ambitious support for local produce, as they felt the service area was going to become a destination, and this was against the regulations at the time.

Planning permission was granted in August 2011. A judicial review was held in January 2012, led by neighbouring operators Welcome Break and Roadchef, who argued the environmental impacts had been underestimated. This appeal was thrown out; Mr Justice Bean backed Stroud District Council's planning approval after a two-day hearing.

It was set to cost around £30million and create 300 jobs. After a delay, construction began on the northbound site in March 2013, and this side opened on 7 May 2014. It was advertised as "a rare breed of motorway service - dedicated to local food, farming and local community". It soon acquired its own fanbase, with many people suggesting the "posh" experience was worth making a journey for alone.

Construction on the southbound side began in June 2014, and this side eventually opened on 19 May 2015.

Use with care. Outdated surveys have been included for interest only.

The 2021 Which? Magazine survey placed Gloucester in first position, with an 82% customer satisfaction score, and full marks in almost every category.

In 2021, Northgate Vehicle Hire conducted an unorthodox survey which received considerable press coverage. This ranked Gloucester in 94th place, making it one of the worst service areas in England, but their unusual formula was influenced heavily by the range of branded facilities available, which goes against Gloucester's ethos.

In Spring 2017, Transport Focus calculated a 99% satisfaction score for the services, making it the third-best in the country. It maintained this score in 2019, and after that it declined to take part.

In 2015, VisitEngland gave the services 5 stars, calling it "fabulous". They said: "customers will be impressed by the extensive range and quality of the produce offered in the shop".

The southbound side gained a Changing Places toilet in 2018.

During early 2019, Westmorland made the Quick Kitchens here open 24 hours a day.

Westmorland were granted planning permission for a highly anticipated 74-bed hotel with restaurant and conferencing facilities at the back of the southbound car park in November 2019. The plans show that the hotel complex will consist of three interconnecting buildings positioned around a lake with the central building housing bar and restaurant facilities on the ground floor and two meeting rooms on the first floor. The second and third buildings will then house the bedrooms, being connected to the central building under glazed walkways.