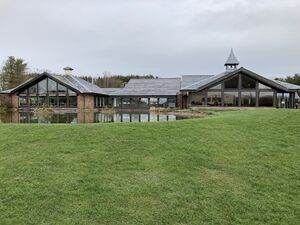 Arguably the UK's most famous service station, Tebay is a family-owned site which is nestled in the scenic part of the M6, with two buildings offering great views over a special part of the country. Its duck pond, farm shop and caravan park make it an unusual destination on the motorway network, and one that has won a lot of die-hard fans.

Lorry drivers may prefer the J.38 Truckstop, which is also ran by Westmorland and located a mile to the south at junction 38.

First 3 hours free for all vehicles, after which cars must pay £12 and caravans, motorhomes and HGVs £18 with a £3 food voucher.

Prices can be paid for in the Quick Kitchen, with instructions in each car park. 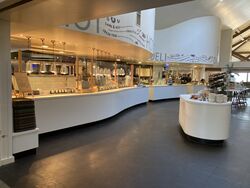 Simplicity is best in the restaurant.

Tebay starred in its own four-part documentary series on Channel 4, which broadcast through July 2021. The programme, which looked at how the service area is managed and met its suppliers, was a hit with a broad range of viewers, pulling in over a million viewers and more than Wimbledon did. In the weeks that followed there were reports of queues of traffic approaching the service area. A Christmas episode and second series were created, and a sequel about Gloucester has been commissioned.

Many people believe Tebay is the only one of its kind. Westmorland in fact run a couple of service areas, which all follow the same principles. In fact most of the talk about Tebay tends to be about the northbound side, which is the older of the two and was deliberately positioned to have the best views possible. The stunning landscape and local wildlife might have helped Tebay be so memorable, but it would be nothing without Westmorland's ethos and relationship with their landscape.

While there is plenty of detail on how Tebay services came about, by far the most common question from its fanbase is "why can't all motorway services be like Tebay". The answer is that its owners took a gamble on a contract which all the big names had turned down, and they approached it with no experience in how the motoring or food retail industries work, but with a lot of knowledge about farming and about Cumbria.

That different background is why Tebay turned into a place that is free from tacky advertising and big-name franchises, making it look more like something from the National Trust than the motorway network. It's a model which works best with small companies, who are able to pay attention to every detail and aren't chasing the highest profit margins or the largest audiences.

The motorway network's first two farm shops were opened here in 2003 by Prince Charles. These continue to be what makes Tebay famous, especially among its devoted fanbase. There is now a large gift shop too, which sells products made locally.

Tebay is one of the few sites where signage encourages customers to use the Rear Access, although 'no entry' signs are still in use. The back road is mainly there to serve the hotel and caravan park, which are technically built off-site as they use land which the Ministry of Transport didn't regard as part of the original service area. Since the government sold its interest in service areas, Tebay now forms part of a 120 acre site that its owners manage, including High Chapel farm, which supplies the service area. A team of rangers looking after the Tebay's wildlife, including the famous ducks.

In 2010 the service area raised £3,500 for the Cumbria flood appeal. It continues to support local charities, such as the local mountain rescue service.

Work will start in October 2022 on converting part of the caravan park into a garden. It will be managed by local charity Growing Well who offer volunteering opportunities to people whose health might benefit from the experience. The project, which is funded with £150,000 from Westmorland and a £180,000 lottery grant, will open in early 2023. The produce will be sold in the service area.