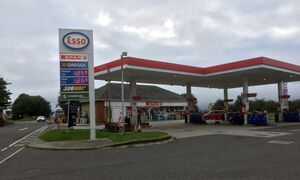 Esso is the brand used by ExxonMobil, derived from its previous name, Standard Oil. Esso filling stations allow customers to gain Nectar points when they fill up with fuel or purchase a shop item.

They are known for advertising campaigns including "Bom, Bom, Esso Blue" and "put a tiger in your tank", as well as the famous Tiger Tokens promotion. Evidence of tiger-branding can still be found at some of their garages. Esso's 'price watch' campaign from 1995 even applied on the motorways, and Esso motorway forecourts were briefly charging competitive fuel prices, although rural sites only ever tried to compete with forecourts within a one mile radius.

Esso ceased trading in Northern Ireland, with many garages becoming Maxol. In the Republic, many Esso garages became Topaz.

In Britain, Esso were the first company to sell unleaded fuel.

As A Motorway Operator

In the early 1960s, Esso had refused to become the operator of any motorway service areas. They then put in a surprise ambitious bid for Heston, which was rejected on the assumption they weren't really interested.

Worried that they would lose Port petrol station to the new motorway, Esso agreed to run it as a motorway service area, and developed the brand name Taverna under which to do it. Taverna went on to build several new services, but then they sold them in 1973.

Esso entered a partnership with Top Rank in 1980, opening several new service area with them. They also put in bids for Clacket Lane, Thurrock and Cherwell Valley, as well as designing a commercial site at Stafford: those that were taken forward were opened in partnership with Granada. Esso have since sold their part at most of those.

Many of Esso's applications made at this time were unsuccessful, so we don't know for sure how those would have worked. Examples of those include Stumps Cross and Duxford, Longbridge, Lower Kingswood, Meon and Swinford. Some of those would have been likely to be similar to Stafford, while others would probably have been smaller.

Separate to Taverna, in 1963 Esso opened their first Esso Motor Hotel in Sweden in 1963. This chain came to Britain in 1966, but it remained functionally separate from Esso's petrol stations and motorway services. The hotels were positioned in urban areas and aimed at businessmen.

In 1972 Esso needed to raise funds, so they leased most of the hotels to Crest Hotels, ending the Esso Motor Hotel name in the UK.

In 1998, Mobil merged with Esso to form ExxonMobil. The Mobil brand could be found at many service areas (including several which they owned outright).

Following the merger, BP acquired all of Mobil's former petrol stations in Britain. The Mobil brand is still used outside Europe. 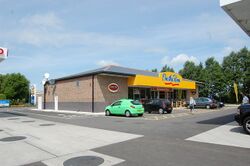 An On the Run shop.

Like the other major forecourt operators, Esso owned and operated several filling stations, which were all sold off by the Autumn of 2015. These 450 stations were operated under the name ROC.

ROC garages were sold to Euro Garages, MRH and Rontec. The stores were previously branded as either Snack and Shop or On the Run. The former had been a staple part of Esso's forecourts since its inception in the 80s, basically being a kiosk serving a few necessities and either Kenco, Coffee Nation or Costa Express, whilst On the Run was introduced as an additional format in 2003 with larger sized stores that included a Costa café and a seating area.

The following motorway filling stations were operated by ROC. These include former Tavernas, and motorway sites developed by Esso, as well as others. They were all Snack and Shops (except where marked), and have all been sold on. 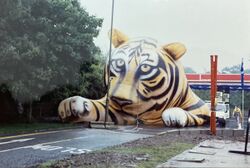 Esso's giant tiger mascot about to be lifted into place (1992).

Esso can be found at some service areas. They are: [view on a map -  Download KMLrefine search]

Esso has been removed from the following official service areas: