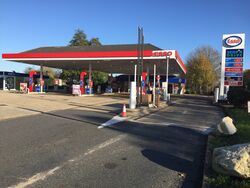 Rontec is a forecourt operator which was formed in 2011 as a combination of a number of investors, mainly Snax 24.

Rontec's main business plan was to purchase sites which had been formerly operated by the major fuel suppliers. In June 2011, a consortium comprising Gerald Ronson's Snax 24, Investec and Grovepoint Capital formed Rontec Investments LLP to acquire the assets of Total Oil UK. The transaction included the purchase of 810 sites from Total, 251 of which were immediately sold on to Shell. In June 2015 Rontec merged with Snax 24.

In more recent years they have taken over 55 former ROC sites and in 2016 acquired 40 Co-operative Group sites. In 2018, Rontec converted 13 Esso branded filling stations to BP, including two motorway service sites. The majority of Rontec's sites are branded Esso.

Rontec replaced many of the former Snax 24 sites, which usually had Mace stores, with own-branded Shop'N Drive and SPAR stores. Concessions within some of their stores include West Cornwall Pasty Company and Costa Express, but they also have Subway franchises located within lots of their larger stores.

Rontec have also opened pilot Morrisons Daily stores across the country, in partnership with Morrisons. This trial proved to be a success and Rontec have now started to phase out their use of SPAR as a result.