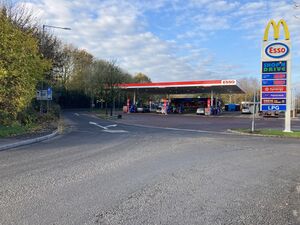 A36 Ower Roundabout
(also accessible to traffic on the A3090)

A small service area on a roundabout close to M27 J2. 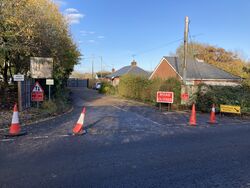 The houses at the back of the service area.

Planning permission was sought by the family who ran Barton Stacey services. They then sold the majority of the land to developers in 1990. At the time the roundabout served both the A36 and the A31, although the A31 here had already lost its status as an important route. It was initially known as Ower services.

EG Nash & Partners are the first developer in the records. They were only focused on building a Texaco forecourt, but they wanted it to be part of a "comprehensive TRSA" and published a number of indicative layouts showing a motorists' restaurant and several parking areas.

Their plans showed the possibility of building a restaurant to the west, north or east. One of these, which may have been published prematurely, named the restaurant as an 80-seat Little Chef. This one included space for a Travelodge too. The plans also included a landscaped picnic area at the eastern end, by the River Blackwater, which was provided but quickly became overgrown and is now abandoned.

The service area was built on a long driveway with Shelley Nursery and some associated bungalows at the far end. Those bungalows can now only be accessed by driving through the service area. There was an additional house by the roundabout which had to be demolished.

Not long after the petrol station had opened, in 1993 the restaurant partner was announced as McDonald's. Their restaurant opened shortly after.

There was another attempt to build a Travelodge here in 1998 on the unused land at the western end of the site, but this was unable to secure planning permission.

The Star Market forecourt shop became a Somerfield, and then Co-op Food. The supermarkets wanted it known as 'West Wellow services'. The petrol station was sold to Rontec in November 2019 and rebranded Esso, with the convenience store becoming Shop'N Drive.