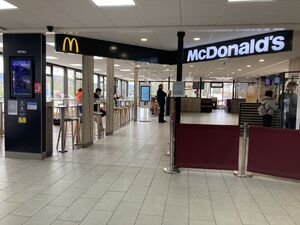 McDonald's is possibly the world's most famous fast food brand, but until recently it was almost impossible to find on the motorway network. Now it is common both on and off the motorway, almost always open 24 hours, and taking the majority of the trade everywhere it is built.

Roadchef announced in September 2012 that over the next few years they would roll out McDonald's to all their sites, replacing The Burger Company. By summer 2016, all Roadchef sites except Bothwell included a McDonald's, and their McDonald's offer outperforms almost every other Roadchef facility put together. A 2022 study found that McDonald's is the most popular food brand on the motorway.

Throughout the 2010s, McDonald's have been refurbishing all their restaurants, including franchised ones. For services, this replaced their sometimes dinghy units with wide and open dining areas with touch-screen ordering, under a project they call 'Forever Young'. This style has been adopted by Burger King and KFC in recent years, and the McDonald's screens have scored well in customer surveys.

For many, McDonald's is popular because the prices charged at a service station will be similar to those charged on the High Street, unlike at many other fast food franchises. Motorway users can order online with the McDonald's app.

McDonald's On The Roadside 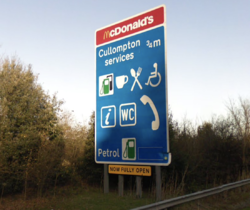 The first McDonald's to open at a service area, and in fact one of the first to open in the UK outside of an urban area, was built at Markham Moor in 1991. Chelmsford soon followed and Appleby Magna opened in 1993, which McDonald's said was marking the start of a new era. They were keen to open more restaurants at roadside service areas, using the sort-of locations which had so far been monopolised by the likes of Little Chef.

In 1992, after the service station planning process was deregulated, McDonald's indicated they may build their own motorway service areas. They had been involved in the deregulation consultation, and remarked that it fitted in with their expansion plans.

They developed two service areas in partnership with Margram, with McDonald's being the main facility and signposted operator of Blackburn and Cullompton. This technically means McDonald's can be regarded as a motorway service area operator, even if they were only ever running the restaurant area. Extra took over these service areas in 2003, and made themselves the main operator in 2009.

At Other Motorway Sites

When the first McDonald's at a Welcome Break opened in 1995, they said that they were going to build one at all 26 of their sites. This process was stopped after just two because Welcome Break were bought by Granada. Separately, Granada did trial placing McDonald's inside Little Chef, but they were much more impressed by Burger King and insisted every motorway service area should have a Burger King. At the time, Burger King was a much easier brand to roll out.

This put McDonald's on the back foot, and they spent the next few years looking at forecourts and other potential roadside locations. Even when Welcome Break split from Granada, no new McDonald's opened, and for a long time McDonald's was a very rare sight on the motorway.

Next, Roadchef trialled McDonald's, but were similarly unimpressed and decided to change them to Wimpy in 2001. These units had again been all operated directly by McDonald's, unlike the modern Roadchef agreement which is a franchise agreement.

One of the first McDonald's drive thrus to be built at a service area, pictured in 1993.

McDonald's restaurants can be found at many A-road services. Most are open 24 hours and have drive thrus - though a map of drive thrus only is available. 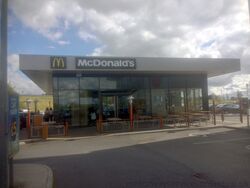 In Ireland, McDonald's can be found at some Circle K services:

McDonald's has been removed from the following official service areas: