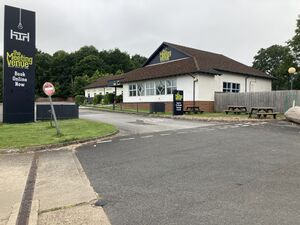 Stoke Rochford no longer functions as a service area, although it has had quite some history on the A1.

There are records of 'Stoke Rochford Road House' going back at least as far as 1928, but maps have the building labelled as a 'club house'. It's possible that there were two separate buildings, one serving users of the Great North Road, and the other serving visitors to the adjacent golf course.

The A1 was upgraded to become a dual carriageway in 1961. Around this time (at some point between 1952 and 1977), the facilities were expanded, with a much larger road house being provided and a filling station setting up in the parking area between the two buildings. These would all be positioned on the northbound side of the new dual carriageway.

Meanwhile, during this period another filling station set up on a smaller plot of land opposite the road house, serving southbound traffic. The date which that opened isn't clear but we do know that in 1968 a large footbridge was erected, allowing pedestrians to cross the A1 and move between the two filling stations. This gave it a similar appearance to the motorway service areas which were being built at this time, even though the A1 was only a dual carriageway and had plenty of gaps in it where motorists could turn around if they wanted to.

The road house traded as Roadhog until the 1980s.

It was purchased by family diner chain AJ's, who converted it into one of their restaurants. They also built a brand new restaurant on the site of the southbound petrol station, which had closed by this point. This created a rare example of a paired AJ's site.

The northbound side, boasting both a branded restaurant and a filling station, received full signage from the A1. It's not clear if the southbound side ever did.

The outlook quickly turned negative when, in 1989, the plan to replace the A1 with a motorway was announced. There was no immediate threat to Stoke Rochford (and in fact the replacement never came), but AJ's were concerned that they may be expected to fund a considerable upgrade at a time when they were already struggling. As a result, both restaurants were sold to McDonald's.

The footbridge was demolished in the 1990s.

Being an isolated location, these restaurants weren't in keeping with much of McDonald's estate, and they had closed both restaurants by 2005. The northbound restaurant became a café called The Meeting Venuewebsite, which still trades today. The more isolated southbound side was left abandoned until it was purchased by adult store Pulse & Cocktails in 2009.

By now the remaining northbound forecourt was operated by Malthurst and branded BP, with a very small and old-fashioned shop. This closed and was demolished in 2012. The land remains abandoned. With that closure, the road signs were finally removed in 2014, ending Stoke Rochford's tenure as an official service area.