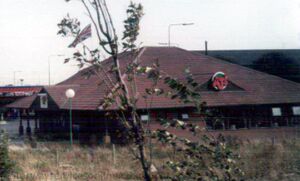 AJ's was a family restaurant founded in 1986 by former Happy Eater directors Allen Jones and Jane Pickard, who gave their initials to its name.

The chain operated family restaurants on A-roads in a similar vein to Little Chef and Happy Eater. Its circular logo was usually placed on a tall, diamond sign. A second logo showed a rabbit carrying a plate.

Two of their branches were acquired from Hickory's, as their owners had wanted to focus on motorways. Most others were new-builds attached to petrol stations.

Critics from Restaurateur praised AJ's for its excellent value and service in their March 1989 review. Its menu offered a range of burgers, including the 'AJ's Majorburger' where the customer chose two toppings, the farmhouse grill and a 20% discount for over 60s who had purchased their Senior's Choice card.

Seeing the success that Forte were having with the Little Chef brand, Granada were keen to do something similar and in 1992 they struck a deal with AJ's to open AJ's restaurants at seven of their A-road services, one Granada roadside hotel and as an extra brand at their Leigh Delamere motorway services. It was often promoted with Granada Hotel on a plate below it.

These were operated by Granada under a franchise agreement. They lasted until about 1996, by which time Granada had acquired Forte and were able to use their newly acquired own brand name, Little Chef, instead.

AJ's had hoped to have 50 restaurants, but the most they ever had was about 25. They blamed the recession in the 1990s for their target not being met. They were also critical of Forte's network coverage, saying "we are living off the leavings from a rich man's plate" and "we cannot compete".

In the mid 1990s the company stated to shrink. As well as losing the Granada franchises, they sold four sites to McDonald's in 1994. Three of these were rumoured to be on the line of the new A1(M) motorway, and AJ's felt they couldn't afford to upgrade them. Another site at Glatton was compulsory purchased as part of the road upgrade.

The remaining restaurants were then sold to The Celebrated Group in 1996. They intended to convert all the restaurants to Starvin Marvin's, but they only changed the two at Chichester.

In about 1998, Granada looked to expand Little Chef by purchasing all of Celebrated's restaurants. However, as many of them were already quite close to existing Little Chefs, the new recruits gradually closed. The one at Barton Mills lasted the longest, with its Little Chef closing in 2012.

The following restaurants were operated by AJ's: