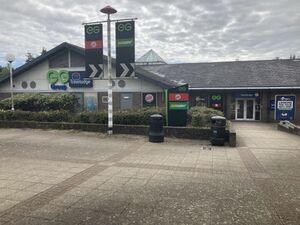 The first service area in Cornwall has a large building set into a hillside, although its facilities are somewhat limited by traditional standards.

First 2 hours free for all vehicles, after which all vehicles must pay £14 per 24 hour period.

Prices are paid in the forecourt shop and fees are strictly enforced by CP Plus. 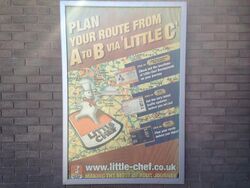 Granada didn't want to lose out on the trade in Cornwall, so they chose to build a large site here even though the custom has turned out to be relatively low and hasn't really justified such large grounds.

The Department of Transport dictated that the service area be built away from the A38, in case a flyover was ever needed at the Carkeel Roundabout. The town council "fully supported" the service area. There is a farm access through here too.

A scheduled opening date of February 1989 was given. There were 150 car parking spaces and 10 coach parking spaces, a 34-bedroom Granada Lodge and a 180-seat Country Kitchen Restaurant. The restaurant occupied one end of the building, with other ends being occupied by the shop and toilets. A condition of it being built was that a tourist information centre would be provided outside in its own brick-built building, promoted as The Cornwall Centre.

The site had large signs all around calling it Granada Saltash. It was given the same status as their motorway service areas, mainly because it offered accommodation.

A fashion show was held in the restaurant area in 1990 - an unusual event for a service area.

The Country Kitchen restaurant was changed to an AJ's franchise, and then Little Chef. The Granada Lodge became Travelodge. The tourist information centre moved out in 1994, and Granada wanted to turn this into a drive thru Burger King. The Burger King eventually opened as part of the Little Chef unit instead. In 2001 the hotel was extended, and its reception was moved to the main foyer.

Granada were frustrated by the abandoned building outside the entrance, and in 2001 they arranged for it to become an independent children's nursery - a somewhat unusual facility for a service area on a main road.

In 1999 wanted to work on an "experimental concept". The proposal never seemed to have been thought out in detail, but it involved a possible restaurant or shopping facility, probably using the name "Fresh Express". Granada had recently invested in selling takeaway food from their petrol stations, and wanted to try something different at Saltash.

Granada became Compass, who treated the motorway services and Little Chef as separate divisions. Confusingly, Saltash fell under Moto, except for the restaurant building which would be owned by Little Chef, leaving Moto with little reason to promote their own name. They later sold the car park.

The building was too large for a struggling Little Chef, which did begin to show. The shop became Coffee Tempo!, which was closed and was left empty. Little Chef closed their own restaurant in 2012, but they continued to operate the other facilities, principally the Burger King. They opened a Subway in 2014.

In 2017, Little Chef was acquired by service area operator EG Group, who still didn't operate the forecourt here. They refurbished all the facilities in the summer of 2018, moving the main seating and restaurant area to create a more open-plan food court. A Sainsbury's On the go store was then added in June 2019, which permanently closed in summer 2020.

An old Little Chef advert was still displayed on the exterior wall of the main amenity building here for quite a while, just to the left of the entrance, promoting ways to find Little Chef locations online.

This seemingly innocuous Cornish service area has faced the wrath of locals and the authorities a few times.

In 1996, a series of outdoor markets were held at the service area, without planning consent. Formal permission for car boot sales was requested in 1997, but was overthrown by frustrated residents and an untrusting Highways Agency.

Granada wanted to erect a large Celtic Cross at the back of the services, where there would be a sign on the A38 inviting traffic to stop and visit it. They were told they could have the cross (without the sign) for two years only, as the Highways Agency wanted the land for a road improvement. Neither the cross nor the road improvement ever happened. 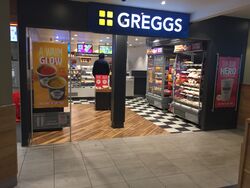 During the 2018 refurbishment, a Greggs was added and opened in September 2018. This was the first branch of Greggs ever to open in Cornwall, even though it was operated under a franchise agreement.

Local residents were furious when they heard about the proposed addition, and were quoted in the national press saying they preferred their existing local bakeries. The press claimed that Greggs tried to keep the actual opening of the branch quiet, not adding it to their website for several weeks. The store closed on 12 September 2019 without fanfare.

On 13 January 2020 - perhaps inspired by the story about Rutland not having a McDonald's - the national press started reporting that Greggs had been "forced out" of Cornwall. Greggs attributed the closure to their own "thorough review". Only the Plymouth Herald correctly reported that the branch had been closed for some time and hadn't faced any physical hostility, with the local paper instead reporting that "no one noticed" it had gone.