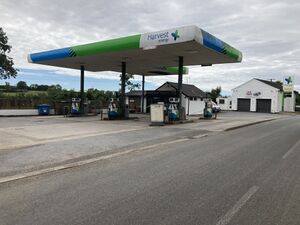 A38 southbound between Exeter and Plymouth

Several facilities spread across Smithaleigh village make up this service area, which is only available when travelling southbound. You can get there from the northbound side but it's a long detour via Lee Mill - which has its own truckstop and café.

Short stay customer parking is available for cars at the filling station.

Long stay parking is available for all vehicles at the lay-by at the other end of the village. 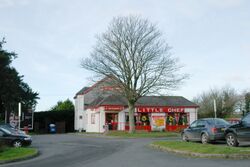 The garage here was built in the 1960s, on the original route of the A38. The hotel - positioned further down the road - is a very old farm building.

An old house called Smithaleigh Villa became a Little Chef in 1983, which formed the main component of the service area. It closed in 2012 and is now home to a cleaning company.

TotalEnergies opened rebranded the site from Harvest Energy in July 2022. 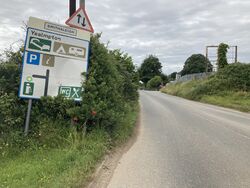 The tired looking sign upon entering the village, with the now-redundant totem poles in the background.

After the A38 around Lee Mill was upgraded in the 1970s was bypassed here, signs were placed on the new southbound carriageway to advise traffic of the facilities available. A secondary sign was placed in Smithaleigh, which showed that the restaurant (and toilets), filling station, hotel and parking were all in different places.

A number of advertisements existed too. A sign showing BP's fuel prices was placed outside the Little Chef, while Little Chef posters were placed all around the roundabout, outside of their own boundary.

Even though the Little Chef closed in 2012, as of 2021 the village road sign still shows a restaurant and toilets being available on the right, albeit with the part showing you where the right turn is now covered up. It also carries an unauthorised promotion for BP (which closed several years ago), uses a very old fuel pump symbol, and colours which haven't been valid since 2015.