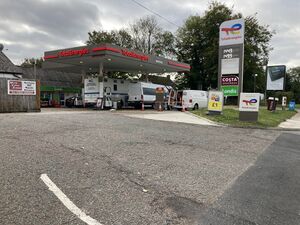 Total is the petrol brand of the large French group TotalSA. In the UK, it has replaced out its sister brands Elf and Fina; the latter had built a number of service areas with Kelly's Kitchen. Total's fuel was branded 'Excellium'.

Total quit the UK market in 2016, but made a small return in 2019. It is now known as TotalEnergies. 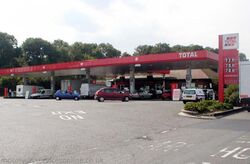 Before quitting the UK, forecourts which were operated directly by Total were called Total Convenience Stores (TCS), and were generally found on A-roads.

The TCS name was never used as a public brand, and instead each TCS site had a shop branded Bonjour. This sometimes had an own-branded café called 'Cafe Bonjour'. Other sites include various refreshment concessions such as Nescafe & Go coffee machines and Bake & Bite facilities.

Some smaller forecourts only sold snacks and were just branded as 'Shop'.

TCS's final petrol stations were sold to Rontec and Shell throughout 2012 and 2013.

The final Total-branded forecourt on the motorway network was at Lymm truckstop, and it closed in 2013. Their final A-road service area was at Polegate, which closed in 2016. Total ceased trading in the UK the same year.

Return To The UK

After three years, Total entered into a fuel network partnership with Prax Group (owners of Harvest Energy) in November 2019. This saw the first of a new generation of Total forecourts opening in Thirsk at the end of the year.

Total rebranded to 'TotalEnergies' in summer 2021. TotalEnergies soon opened their first site at an official service area at Worsted.

Total used to operate at the following services:

Total planned their own motorway service areas at: