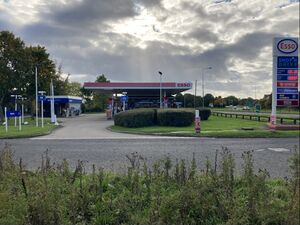 A689 at Sedgefield
(also accessible to traffic on the A177)

The only major facility on the A689 between the A1(M) and A19, positioned on the Sedgefield Bypass. 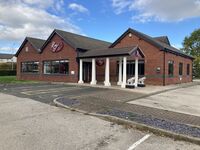 This service area was developed in the early 1990s by Heron Garages, who opened one of their Heron forecourts here. Trusthouse Forte later added a Little Chef and Travelodge hotel, opening in early 1995. The forecourt had been sold to Fina by this point.

New owners Granada then added a Burger King to the Little Chef in 1999 whilst the forecourt rebranded to Total in the same year following Fina's merger. The Burger King was later removed in around 2005.

The Little Chef continued to trade until the summer of 2010, when it then closed. The restaurant later became an Indian restaurant called Le Raaj.

Following Total's nationwide shutdown in 2012, the forecourt was acquired by Rontec who added their own-branded Shop'N Drive store to the site.