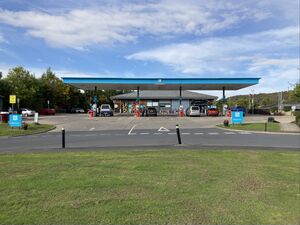 A small service area placed on the A171 westbound. It's also accessible to eastbound traffic via the roundabout, but it isn't signposted in that direction.

Parking on the forecourt is limited to 2 hours maximum stay and is strictly enforced by Horizon Parking. 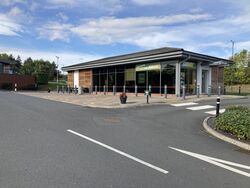 The Subway Drive Thru.

The service area is named after Wood House Farm, which had its land divided by the A171 Guisborough Bypass. The bypass was completed in the 1990s, and space was left on the realigned Middlesbrough Road for a new development to be added, in an area which became known as Woodhouse Triangle.

Plans emerged for a service area to be built on the Woodhouse Triangle in 2004, by a company named Woodhouse Triangle Ltd, for a filling station, Subway Drive Thru store, pub-restaurant and hotel. The service area opened in 2006 with a Somerfield forecourt and a very rare example of a drive thru Subway, which still stands today. The pub-restaurant and hotel never materialised and were eventually scrapped, with the land being used to build a residential care home.

Following Somerfield's merger with the Co-op in 2009, the filling station briefly rebranded to a The Co-Operative Food filling station, before receiving Total branding in 2011 and retaining the Co-op Food store. The filling station then became a Co-op Petrol site in 2016 following the end of the partnership between Total and Co-op.