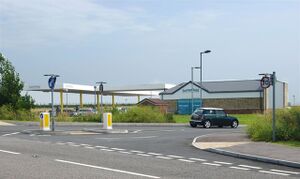 As a convenience store, Somerfield had a fleeting appearance at motorway services, but had more of an impact with their forecourts.

Somerfield would generally operate stores attached to Texaco filling stations, plus a few attached to BP that were purchased from Safeway. The lease of some of those was taken over by Shell in 2008.

They also leased a supermarket which formed the majority of the facilities at the unusual Blackburn with Darwen services. This stemmed from their relationship with [[Margram], where Somerfield opened at a few Margram forecourts.

In March 2009 the Somerfield chain was taken over by Co-operative Group to merge with their The Co-operative Food brand, which took effect over the following three years. All stores have since been re-branded again to Co-op Food.

Somerfield used to be found at the following services: