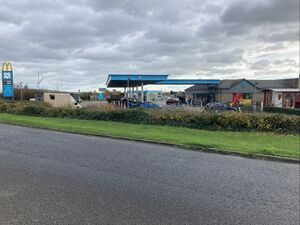 A299 at Minster Roundabout
(also accessible to traffic on the B2190)

A newer development close to Kent International Airport, as the A299 nears Ramsgate. 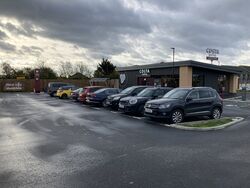 The latest addition to the ever-expanding service area.

It is unusual to find a fully signed, official service area on a road that has never been a trunk road, but the A299 offers two of them. Kent County Council seem to be very keen to signpost service areas, perhaps because they spend a lot of time dealing with HGV parking issues, although this particular service area doesn't offer HGV parking.

The service area was first proposed in 1992, with Margram planning to build a filling station, restaurant, hotel and parking for all vehicles in the south-east corner of the Minster roundabout, on the site of the former Mount Pleasant Farm. These plans were approved in 1996 but never built.

A second set of plans from Margram came ten years later in 2003, which proposed a filling station and drive-thru restaurant in one combined building, with 38 car parking spaces and 26 HGV parking spaces. More land was available for development to the south and east of the site. This was approved in 2005 but amended in the same year with the drive-thru restaurant removed from the sales building.

The first facility eventually opened in 2005 as a Margram-operated Somerfield Essentials filling station, known as 'Minster service area', with car and jet washes and 10 HGV parking spaces. It was known locally as Mount Pleasant lorry park.

With the filling station now open, interest in the surrounding land soon increased, with Whitbread proposing a Premier Inn hotel and restaurant in 2008, along with a McDonald's Drive Thru restaurant in 2011.

By 2012, both the McDonald's Drive Thru and Premier Inn hotel had opened, alongside the Smugglers Retreat branch of Table Table. The lorry park had been closed off by this point. The land was later put up to let.

There have been several proposals to re-utilise the lorry park, with one from 2018 planning to turn the land into a container storage yard and hand car wash, which was refused. Minster Food Station began trading from a mobile catering unit and received planning permission to build two units and car parking in the former HGV parking area in May 2021.

A Costa Drive Thru opened on land to the east of the Premier Inn car park on 18 June 2021. Two electric vehicle charging points were also installed in the new Costa car park but are yet to go live.