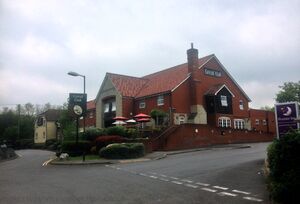 Table Table is a brand owned by the Whitbread Group, applied to pub-restaurants across the country. Several of these are at A-road services, where they are attached to their sister hotel chain, Premier Inn.

As is common with pub-restaurant chains, each branch is given a local name.

Table Table was only created in 2008 and was evidence of Whitbread wanting to rethink it's restaurant strategy. In 2000, Whitbread re-branded many of their Beefeater restaurants to Out & Out, which became Table Table.

Some poorly performing Brewers Fayres were converted to Table Table, but that process has now stopped. During 2018, most of the roadside Table Table restaurants were replaced by Whitbread's other brands, including a return to Beefeater.

Table Table can be found at the following signposted service areas:

Table Table restaurants have been removed from the following signposted service areas: