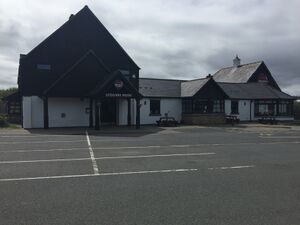 Brewers Fayre is a chain of pub-restaurants owned by the Whitbread Group. It is often paired with their sister company, Premier Inn, and the two form the main offer at several A-road services.

Larger Brewers Fayres used to have an area for families, named Charlie Chalk's Fun Factory, attached. Between 1999 and 2005 some Brewers Fayres, including those at services, were re-branded Brewsters. These were the ones which wanted to focus on children rather than just adults.

Whitbread have been known to change around some of their restaurant brands. As a result branches of Brewers Fayre at service stations have taken over from Table Table, and been replaced by Beefeater and Cookhouse & Pub.

Brewers Fayre has been removed from the following signposted service areas: