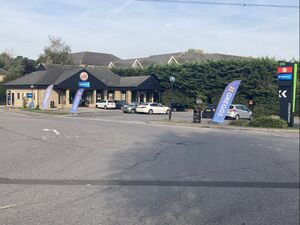 A350 on the Chippenham Bypass

Sat at the end of the Chippenham Bypass, close to the M4, is one of the last-remaining Burger Kings in this area.

The service area here was developed as part of Crest Homes Plc's major Cepen Park residential development in the early 1990s. As part of the works, the Chippenham Bypass was created to the west on the town, diverting traffic away from the town centre.

The bypass was completed in the early 1990s. Forte planned a Little ChefHistory restaurant, which was opened by Granada in around 1998 with an enclosed Burger King franchise. It was their newest generation of prefabricated building design, with what they called a "traditional look" and a fast construction time. This was built alongside Esso filling station.

Following the opening of the service area, Whitbread opened one of their Travel Inn hotels and a Brewsters restaurant on the adjacent land in early 2001. This created the unusual situation where the service area is connected to the main road at two (now three) separate junctions. The presence of the care home in the middle of the facilities is a unique feature of this service area. 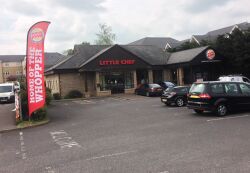 The forecourt was then sold to BP in March 2016 who converted the site to one of their BP Express sites, reopening on 7 April 2016 with a M&S Simply Food store and Wild Bean Café concession.

The Little Chef soldiered on with its Burger King until July 2016, when Little Chef decided to close their restaurant but keep the Burger King. The former kitchen was hidden behind a partition and the former dining area was adopted by Burger King.

The restaurant building was sold to Euro Garages in January 2017. Unlike the Little Chefs included in the deal, this Burger King fit perfectly into their estate, so nothing changed until October 2018. This was when the space was filled by a Greggs store. The Burger King was moved towards the centre of the building utilising the former Little Chef kitchen space.