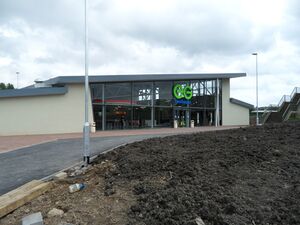 Through the 2010s, the growth of Euro Garages has been phenomenal, with a portfolio which has grown to include hundreds of petrol stations and restaurants, one motorway service area, and a wide range of partner brands.

In 2016 Euro Garages merged with EFR Group to create EG Group, a brand name which has been introduced to their catering areas. EG Group is now the UK's largest operator of KFC, Greggs and Starbucks franchises.

The wider business has continued to grow, acquiring thousands of petrol stations around the world, as well as taking over established brands such as Asda. Accounts of the success of EG Group rarely mention that its growth was funded by a loan from the founders' previous business, Europlast. Some commenters have raised concerns at how much debt is building up. Strictly speaking, we should add that there is nothing to suggest that this is going to be a problem.

Meanwhile, we do know that Europlast has a poor health and safety record, although this is a separate business.

EG Group's founders were nominated for MBEs in October 2020. They themselves are involved in a number of businesses, and EG Group now has long-reaching arms which include operating restaurants like Leon and Asda supermarkets.

Asda's forecourts were supposed to be transferred to EG Group, but this decision was reversed in October 2021, apparently as new information had come to light. Bloomberg reports that the firm is now considering a full merger with Asda, creating a foodservice mega-brand.

Euro Garages were founded in 2001 by the Issa family, with a single petrol forecourt in Bury. Since then the company has expanded rapidly, usually by taking over struggling, under-performing petrol stations and redeveloping them to provide additional retail facilities (with various franchise partners including SPAR, Subway, Greggs and Starbucks), in so turning around their fortunes.

One of their biggest early projects was the former Bolton West services, which was rebuilt to provide two large, new buildings.

It was announced between April 2013 and September 2015 that Euro Garages had purchased around 300 corporate filling stations from Esso and Shell. Euro Garages added a selection of their partner brands to these sites as part of their investment plan, which caused a bit of public controversy as people preferred Esso's Costa offering and Shell's Deli2go over Euro Garages' new food brands like Greggs and Subway.

Euro Garages were the first operator to introduce Starbucks on the Go into their filling stations, replacing Coffee Nation in June 2013.

Recently Euro Garages have been involved in a number of developments next to busy motorway junctions, including Markham Vale on the M1 and Frontier Park by the M65. These are often part of what are known as 'New-to-Industry' sites. Most of these aren't signed from the motorway (which would bound them by more regulations), but instead they rely on being highly visible. 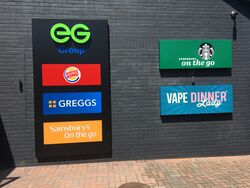 EG Group branding on the wall of one of their services, introduced in 2018.

Euro Garages' strategy continued, taking in large services such as Monmouth, including its lodge. They purchased motorway forecourts from more established operators who wanted to focus on retail.

Euro Garages started building new Starbucks buildings, usually drive thrus. Mostly these were alongside petrol stations they already owned, but some were not.

In December 2016, it emerged that Euro Garages were looking to take over Little Chef, and they purchased it on 1 February 2017. Many of these restaurants were next to forecourts Euro Garages had already acquired. During a long refurbishment process the smaller restaurants became franchises such as Starbucks or KFC, while the larger ones were eventually converted to become several franchises under one roof, resembling a miniature version of some of the busiest service stations in the country.

Euro Garages generally advertise the brand names they operate more than their own name, but in 2018 this changed and prominent "EG Group" signage was fitted to many of their new restaurants. An all-black colour scheme was applied, possibly inspired by the corporate colours required at their Starbucks branches.

A brief partnership with Sainsbury's to introduce Sainsbury's Local stores didn't work out, however Euro Garages later opened small Sainsbury's On the go stores under licence within some of their petrol stations and amenity buildings. In 2020, Asda announced that EG Group will be trialling 'Asda on the Move' stores in three petrol stations in the Midlands - a precursor to EG Group's purchase of Asda from Walmart.

Further acquisitions took place in 2021, including Leon which brings EG Group closer to the restaurant and supply sectors.

The rapid expansion of EG Group has been largely attributed to the work of the Issa brothers, who built it up from humble beginnings. The brothers are reported to donate 2.5% of their wealth every year to charity and their Issa Foundation supports local hospitals and deprived schoolchildren.

EG Group operate a wide variety of petrol and catering facilities across the country. There is only one which is officially signed from the motorway network:

There are four more large services close to the motorway network which resemble service stations, but are not signposted from the road (and therefore not regarded as official):

The following services are provided entirely (or almost entirely) by EG Group, either under that name or EG Group branding. Note that sites which are not signposted from the road are not included in this list.

Being included on this list doesn't mean it's a large service area, it just means they own most of what is there.

The remaining lists show only services which are signposted from the road. These ones are operated by several companies, of which EG Group is one.

At these services EG Group operate a forecourt, alongside somebody else's restaurant.

Unlike those above, EG Group do not provide the fuel at the following services, but they provide some catering alongside other operators' facilities.

EG Group used to operate at the following official service areas, before they closed: