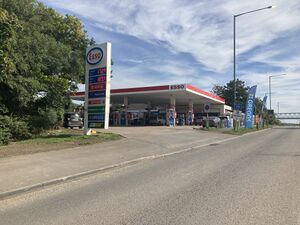 A45 eastbound at Birmingham Airport

A small petrol station situated on the the eastbound on slip from the main exit for Birmingham Airport, which has gained signage over the years due to its proximity to the airport. 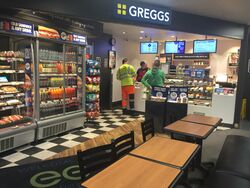 The Greggs store inside the sales shop.

There has been a cluster of properties close to the railway bridge for a long time. There was a tea room named Ann's Pantry (some sources say 'Anne's Pantry'), positioned behind a garage, which was known as Ann's Pantry service station.

The service station survived the widening of Coventry Road, and the construction of the new airport interchange. It was branded Fina and Esso. Esso redeveloped the site in 1992 during which a car wash was added to the site. This was later removed.

The site was then rebranded to Elf in the early 2000s, and later became Total. In 2005, there were plans to add two jet wash bays to the site but this never happened.

The 2007 masterplan for Birmingham Airport included provision for an expansion which would require this service area to be demolished. At present this looks unlikely to be put into action.

Esso regained the site in 2008 and had planned to redevelop the site introducing a larger sales building to the site which would include an On the Run Café as well as a Costa Coffee offering, but the redevelopment was scrapped. The site opened with a Snack & Shop store and a Coffee Nation machine utilising the existing sales building. The Coffee Nation machine was later replaced with a Costa Express machine in 2012.

Euro Garages acquired the site in 2014 and rebranded the store to SPAR and replaced the Costa Express machine with a Starbucks on the Go machine. They later added a Subway store in 2015 and an extension to the sales building in 2017 saw a Greggs store added to the site.