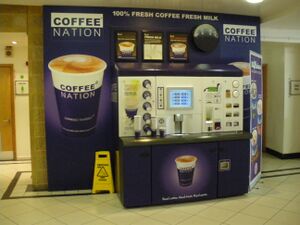 Coffee Nation was a brand of coffee machine made available at many BP, Esso and Total forecourts, and also at a number of the roadside WHSmith convenience stores. They offered eight varieties of coffee, and two hot chocolates.

It was created in 1999 and targeted at convenience stores like SPAR. They later partnered with Welcome Break and Texaco, with more partnerships following.

This seemingly innocuous coffee machine made a big change to the industry. Petrol stations cannot be regarded as service stations in their own right (and therefore signposted from major roads) unless they are able to serve hot drinks. Automated coffee machines allowed even the smallest of petrol stations to meet this requirement without hiring any additional staff, and allowed large service areas to close down at night safe in the knowledge that the adjacent petrol station would meet all their contractual obligations.

On 2 March 2011, Coffee Nation was bought by Costa for £59.5m. Over the following five years the machines were re-branded as 'Costa Express', and introduced to more places across the country.

Coffee Nation used to be found at the following service areas: