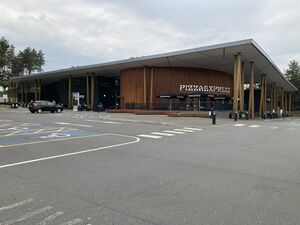 Fleet services has fully re-opened with a brand new building after the previous fire damage. 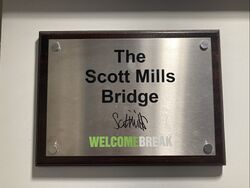 Fleet was one of two Welcome Break services which have a McDonald's. The wide variety of fast food here (the so-called "Holy Trinity") helped Fleet to develop somewhat of a cult following, with it being one of the most talked-about service areas in the country.

The McDonald's became a Burger King and Chopstix Noodle Bar-The Good Breakfast in 2020. The Burger King may be one of the first branches in the country to carry the new corporate logo, as branches were still opening with the old logo for many months after.

On 20 January 2016, it was officially announced that the footbridge was to be renamed 'The Scott Mills Bridge' after a campaign by BBC Radio 1 DJ Scott Mills was launched to get as many things to be named after him as possible. An official opening ceremony took place on 16 March 2016 and a plaque was placed on the southbound side (later moved) to mark the renaming.

Scott Mills's endorsement helped maintain Fleet's social standing, but in some respects its status as a cultural icon - especially among younger drivers - has been lost to Cobham.

The Scott Mills Bridge survived a large fire at Fleet in 2016, an event which caused shock among the fans. A new building opened in September 2018, bringing the bridge back into use and introducing new facilities.

Radio 1 wasn't Fleet's only celebrity endorsement. Previously Jeremy Clarkson had told BBC Southern Counties Radio of his love for the "Fleet cheat", where he illegitimately uses the rear access to avoid queues on the motorway.

Tesla Superchargers were added to Fleet in 2018. However, as of 2021, the chargers on the south-westbound side still haven't been activated, due to technical problems with the electricity connection.

A Ben & Jerry's kiosk was trialled on the southbound side here, opening on 14 July 2021. This was later removed at the end of the same year.