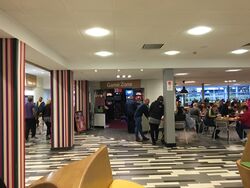 For about 30 years, Fleet was the only service area on the M3, though it had been scheduled to be the third. This page details its history.

The County Surveyors Of Hampshire's joint report suggested the M3 should have service areas at Andwell, Windlesham and Shepperton. Windlesham is about nine miles east of here.

A review was requested after concerns were raised that the suggested sites were too close together. That review selected three new locations, with Fleet in the middle and to be held in reserve until it was needed.

As work started on the M3, the other two service areas both had serious issues. An "urgent review" led to Fleet being pushed forwards instead. It was opened to bids in 1970; the M3 opened in 1971 with a footbridge, ghost slips and cleared space ready for work to start.

The site of the service area was advertised as being 39.5 acres. 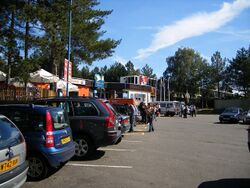 Although the entrance to Fleet has been brought forward to allow for extra facilities, the core of the building remains a low, simple box-shape.

In the years leading up to Fleet opening, service area buildings had drastically changed from being big and bold to being small and discrete.

Fleet is a good example of this, as its rural backdrop, environmental sensitivity and tight budget were all further motivations to avoid building anything that would grab the attention. All around the building the roof was kept low down.

When it opened in 1973, its simple and spacious layout was praised for being the antidote to the overcrowded and unpleasant services which had opened so far. It was one of the last services to open with a Grill & Griddle, with blue plastic seats and neatly-laid tables and Scandinavian-style chip-wood ceiling. The café had a décor of green and mauve, with large windows and the illusion of a high-pitched ceiling which created a spacious environment.

The buildings weren't even big enough to connect to the footbridge - the internal connection at each end was provided in the 1980s, and would later blend seamlessly with the rest of the buildings.

The hotel was first applied for in 1974, but didn't materialise until the late '80s. Also in 1974, plans were put forward to but a canopy over the forecourt and extend the main building.

A government service station critic wrote highly about Fleet, his favourite services, saying in 1975: "a pleasant and tranquil dignified sort of place where people rarely have to be herded like cattle and one to which you could take a planning committee to show them that a service area need not be brash and gaudy and garish, there are already signs that it may not stay this way".

In 1977 Egon Ronay said he found the building design created a pleasant atmosphere, but it was ruined by very slow service with long queues.

The BBC Domesday website suggests that in 1986, 60% of the services's trade happened on the westbound side.

In the early 1990s, Sweet Delights and Shirt Factor were removed.

In 1995, McDonald's opened a trial branch within the building at Fleet northbound, and also at Woodall. This partnership was part of Forte's efforts to recreate the high streets, though it operated under a long-term lease and not the franchise agreements that would become common in the 21st century.

Welcome Break had hoped to roll this out nationwide, but that plan was interrupted when the company was taken over by Granada, who rolled out their own Burger King franchises instead.

In 2004, Good Housekeeping rated the services as one star, complaining of its "dirty car park", "old buildings" and "terrible" food. 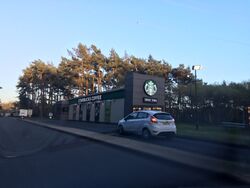 The new Starbucks drive thru.

In 1998, the southbound services were extended to move La Brioche Doree from The Granary to a new, dedicated area to the right of the entrance. The shop was on the left, in an earlier extension. Ahead was the Game Zone and to the right were the toilets and Little Chef. Straight ahead was The Granary, with KFC and Julie's Pantry at the back, in another extended area. The female toilets were on the far left. A Café Kenco would have been offered around this time.

The Little Chef became a Red Hen and Julie's became Burger King. In 2002, the southbound services underwent another refurbishment, to create Welcome Break's flagship dining area. Under this, The Granary became Food Connection, and the Red Hen was closed and sealed off with the Game Zone gambling area moved to block it. A second video game area was created on the far left, while the old Game Zone became part of the main passageway. La Brioche Doree was supposed to become a coffee shop named Fastlane, but actually became Coffee Express.

Until 2001 there was a workshop still in use next to the southbound forecourt. On each side of the road, coach parking has been turned into overflow car parking.

Fleet was one of the first services to try out Welcome Break's new look in 2006, which saw the front of the building (beginning to look tired; painted grey/orange and draped with logos and posters) covered with a picture of a forest. It then saw two refurbishments around 2014, painting it black and then cream, building new porches at the front, and replacing the buffet restaurant with fast food franchises. This created a large food court on the southbound side.

A Starbucks drive thru opened here on the northbound side on 31 July 2012 - The first at a motorway service station. The new Starbucks utilised a formerly disused forecourt building. The Starbucks was open 24hrs, which was novel at the time.

In March 2020 the petrol stations were converted from Shell branding to Welcome Break branding, with Applegreen supplies. At the same time the McDonald's closed due to the COVID-19 lockdown, and did not reopen. This small event was a major moment for Fleet's fan base.

On 18 December 2020, the old northbound McDonald's opened as a Burger King, as well as a combined The Good Breakfast-Chopstix Noodle Bar unit. Whereas the old McDonald's was in its own segregated area, these will form part of the main food court, and have the operational benefit that the turnover is managed by Welcome Break.

On the night of 14 December 2016, the southbound services were severely damaged by a large fire, which started in a faulty coffee machine by the KFC unit and spread to the majority of the building, leaving only the new entrance. 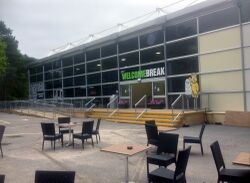 On 3 January 2017 the southbound toilets, entrances, bridge access (benefiting from a new coat of paint) and facilities associated with the car park were temporarily opened earlier than expected, with boards separating the damaged dining area. Other facilities could be accessed using the bridge.

On 11 January WHSmith reopened, and a temporary Harry Ramsden's truck was parked outside. A temporary Starbucks opened at the end of January, in addition to the existing drive thru.

Full facilities, which were provided in a temporary building, opened on 23 March 2017, offering Burger King, Chopstix Noodle Bar, Harry Ramsden's, Starbucks, WHSmith, and the motorway network's first branded Little Waitrose. The temporary building had formerly been used as a food hall for athletes during the London 2012 Olympics.

The temporary building was positioned in the HGV parking area, accessed via a long walk through the woods. This meant no southbound HGV or coach parking was available for 17 months, which was troublesome considering there are no other facilities in the area. Unfortunately the woodland meant limited options were available and priority was given to the greater (and more profitable) number or cars.

The opening of the temporary southbound building allowed for the destroyed southbound services, including the salvaged portion, to be demolished. This was replaced by a taller and airier building, with a nod to the forest as trees formed part of the structural frame and support.

With a blank canvas, an improved dining area could be provided. Internal and external seating areas are positioned by the hotel to overlook the forest. Two entrances are maintained and the footbridge access was reconnected. Toilets are in the far corner, and at the front was a prominent restaurant area, which was later announced to be for use by PizzaExpress.

The new building re-opened on 6 September 2018, with an official opening the following week.