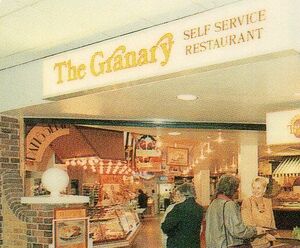 The Granary was Trusthouse Forte's self-branded, self-service restaurant, introduced in 1982. It was passed on to Welcome Break who continued it until 2001.

Under Forte, the restaurants were usually painted cream and brown, with fixed pine seating but a bright dining area. It was an attempt to cater for as many people as possible under one name, as specialised restaurants such as the grill had now fallen out of favour.

As well as on the motorways, Forte also ran Granary restaurants at several airports. This made it an unusual example of a brand which was mainly used inside service areas breaking free and starting its own solo career elsewhere. The airport branches would have closed soon after Forte merged with Granada in 1995. 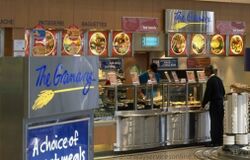 The refurbished, free-flow Granary, in 1999.

In 1998, Welcome Break registered the names Spice Garden and Spice Market. It's not clear whether these were briefly used, or whether they were just a proposal.

The following year, The Granary was still being used and the logo was changed from a circle to a rectangle. At the same time, a streamlined version called Granary Express was introduced. Lighter grey and blue colours were used for this.

As restaurants became increasingly open-plan, The Granary (and the Express version) were surrounded by more takeaway outlets. These were signed as 'The Granary Food Court'. Partners included La Baguette/La Brioche Doree, Little Chef, Julie's Express, Sbarro, Cafe Primo and an unbranded fish and chip counter. These would not all be alongside, but mixed up depending on space.

Towards the end of their run, The Granary used a promotion called 'First for Families'. This saw children's meals sold for £1.99, and internal play areas added. A report dated March 1992 states that breakfast cost £3.65, with a main course averaging £4.

When Welcome Break promoted Eat In in 2006, they used the phrase "gone are the days of The Granary", and later referred to "the archaic opinions of motorway food". It's fair to say they didn't like The Granary's legacy.

The Granary could be found at the following locations: