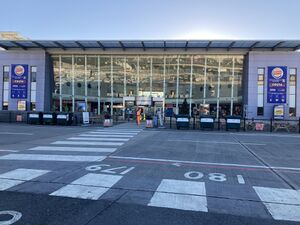 11 more photos in the gallery
Location:

This page describes those operations only, not the whole of Dover Port itself.

Forte won a contract to provide the catering and retail services at Dover's Eastern Docks under the Welcome Break brand name. Although they had been doing this since 1986, the main contract, which covered several terminals, commenced on 9 June 1990.

Although Granada were forced to sell all of Welcome Break's motorway sites in 1995, as Dover isn't on a motorway, they were able to keep it on condition that all association with Welcome Break was removed. As a result, the facilities became Granada branded, and followed Granada's transition into Moto. Each operator has updated the offer to remain in line with the rest of their motorway sites.

Unlike their predecessors, Moto don't display their own branding very prominently at all, preferring to use the Burger King logo instead. Until 2010, Moto didn't list Dover in any of their publicity, making their operation here a bit of a secret for only the most devoted Moto fans.

Until 2016, a Caffè Ritazza outlet was still advertised on the big screens next to each dock, even though it hadn't existed as part of the facilities for some time.

Internally, the only differences between the terminal facilities and their cousins on the motorways are that the shops stock more items related to driving in Europe, the dining areas display departure information and there are more currency exchanges. Externally, the buildings are managed by Port of Dover.

The Terminal 1 building was built for use by Welcome Break, as part of a £2.5m investment. The project's working title was 'Barnacles 2', but it opened as 'Welcome Break 1'. The main facility was a Granary restaurant, with a shop and toilets, all arranged along a corridor. A Bureau de Change, operated by Travelex, was also provided.

Additional toilets were provided behind the building because the main part was only open during the daytime. Outside, the roof extended to one side, where it acted as a coach interchange. The main entrance was a revolving door positioned in one corner. The roof was initially painted yellow, but soon painted Dover's green.

As with most Welcome Break locations, David Fisher was commissioned to paint some artwork. At Dover the mural was dedicated to the destinations served from the port.

Under Granada, the restaurant became Fresh Express, with a Burger King, and a Gscape game arcade was added. A Little Chef Express was believed to be there for a while too. Under Moto, the Granada logo was taken down and replaced by a sign saying "Food Village"; this name was also promoted online using Dover Port's blue colour scheme. Internally it became known as "Passenger Service Building East".

The main restaurant became Moto's EDC and Caffè Ritazza combination, which were later replaced by Costa. The shop became WHSmith. A report dated 2006 stated that Moto were managing a bar and a Franklin's of Boston here, too. The bar was most likely Barnacles Bar, which moved here from Terminal 2.

As part of Dover's Brexit management plan, the Terminal 1 building was demolished in June 2021. At the time, the fireman's switch on the building was still labelled "Granada", while the original brown tiled flooring was still used throughout the main corridor.

The new layout only leaves space for a new toilet building, but Dover are looking at providing Moto with some temporary buildings they can trade from. 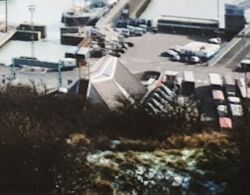 The tall roof of the Terminal 2 building, pictured in 1995.

The Terminal 2 building was opened in April 1986 as 'Barnacles'. It was built under a partnership between Trusthouse Forte, Dover Harbour Board and Pateman & Coupe Architects, as part of a £1.6million investment aimed at tourists. A similar development, called The Wheelhouse, opened for lorry drivers at the same time.

Forte's application for a drinks licence was unsuccessfully opposed by the Merry Dolphin, a restaurant in the reception building that had been Dover's main hospitality facility since 1953. The Merry Dolphin closed soon after.

The new development contained Barnacles - a fast food restaurant; a newsagents, The Hold (a general shop) and a Bureau de Change. It was a distinctive building with a very tall roof, and dark tiling inside. An official opening ceremony was held on 22 May 1986, attended by television presenter Anne Gregg.

As part of Forte's restructure in 1988, Barnacles became part of their Welcome Break division. It may not have been immediately rebranded, but it did appear on their posters as "Dover Harbour". The opening of Terminal 1 in 1990 meant that Barnacles became Terminal 2. The bar moved out and the building was extended in the 1990s with a new lobby.

Dover's distinctive flyover system, known as The Fan, was built around it and left Barnacles sat in a permanent dark shadow. The building carried Granada branding during their tenure.

A report from 2006 stated that Moto operated a shop and a Franklin's of Boston in Terminal 2. A sign outside had a number of covered-up logos, including what looked like Burger King. By now it was only handling freight traffic, and the building was showing its age.

The building was demolished in 2008. As of 2021, some internal Moto documents still listed Dover Terminal 2 as one of their sites.

Another catering building was built for use by Moto in 2004. This one was in Terminal 3, branded "Broadwalk Shopping", but known internally as "Passenger Service Building West".

It used a much more modern design with a tall, glass front and seating spread over two levels. The second level acting as a viewing platform over the harbour. Similar facilities to usual were offered inside: Burger King, Caffè Ritazza, Gscape game arcade, a Travelex Bureau de Change and a shopping area which used the Broadwalk name. 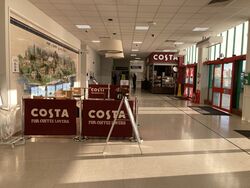 The Costa unit in the passenger building, provided by Moto.

Moto also operated a Caffè Ritazza and a shop in the Dover Travel Centre, which was the 'land' side of Eastern Docks. The building itself opened in the early 1980s and was built underneath a car park, making the building itself difficult to see.

The Travel Centre closed in April 2014, but tenants were moved to the Passenger Handling Building, with Moto opening a Costa unit within it.

Previously, Forte had opened a bar and restaurant for lorry drivers, called The Wheelhouse. This opened in 1986.

In addition to the terminal facilities described here, Dover Port used to sell fuel too. It wasn't ran by any of the operators discussed so far, but was branded Mobil (later BP) and positioned at the entrance to the docks. This was closed in about 2004.

In 2007, Welcome Break returned to the market by taking on a similar site a few miles down the road in the Eurotunnel. They left this in 2013.