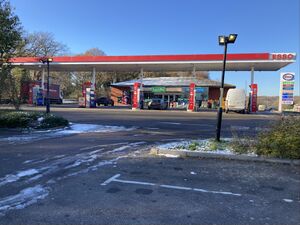 A2 westbound between the M2 and Canterbury

The Gate Inn is an old facility which has managed to survive the modernisation of the A2. It has a partner on the other side, Harbledown. 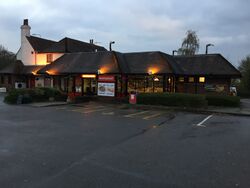 The Gate pub was a historic facility provided on the old Watling Street, which appeared to be named after a toll gate. This was expanded to become the Gate Inn, which survived the A2 being upgraded with a short bypass in the 1970s. It has been a Grade II listed building since 1979.

At this stage there were proposals to build petrol stations on either side of the road. Only the westbound side was approved, and built by Esso. In February 1984 the Gate Inn was taken over to become the Gate branch of Little ChefHistory, turning Gate into a full service area. A Travelodge was built in around 1995.

The Little Chef closed on 22 August 2012 as part of the chain's cutbacks. It was purchased by the branch manager who turned it into Sheila's Kitchen. Sheila's Kitchen opened in May 2013 with the kitchen retaining the look of an old pub whilst serving as a modern diner. Sheila's Kitchen closed its doors for the final time on 24 April 2019, with the owner moving on to focus on other business ventures.

The original Travelodge car park, which sits on the south side of the forecourt, has been abandoned for many years. This had been set to be given a new lease of life as MFG were granted planning permission in November 2020 to build a Starbucks Drive Thru here. There is now a new proposal to convert the derelict Gate Inn building into a Costa Drive Thru, with eight new electric vehicle charging points forming a charging hub and the abandoned car park being brought back into use.

Past the restaurant is the Esso petrol station which was rebuilt in 2006 as part of Esso's On the Run programme introducing a Costa café to the site. This was taken over by MRH in 2015 who introduced Hursts and Greggs brands to the site. MFG later replaced Hursts with a Londis store in 2020.