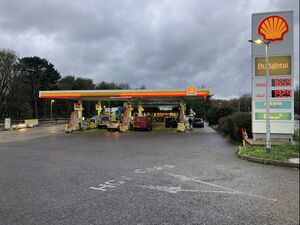 This is the service area on the A2 in Kent. For Jubilee Garage on the A1, see Colsterworth.

A loop road does allow eastbound traffic to get back to the roundabout, although it's not easy to find and the site isn't signed in this direction. 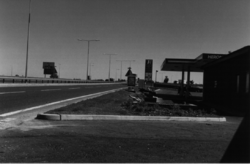 The A2 Jubilee Way out of Dover opened in 1977. A narrow piece of land next to the Duke of York Roundabout (sometimes called Guston Roundabout) was later used to develop the service area.

The filling station was planned by Heron and opened in around 1989, with a Heron-branded forecourt known locally as Guston Court Farm Service Station. There were soon plans to attach a restaurant to it, with one of the two being from Margram, who proposed a 38-bed hotel and 88-seater restaurant.

Whitbread opened the Duke of York branch of Brewers Fayre here in 1995, named after the neighbouring Duke of York Military School. Plans for a hotel continued, with Whitbread eventually opening a 40-bed Travel Inn to the north of the filling station in 1998. Due to the location of the hotel, it is accessed via a long driveway which runs alongside the filling station.

The forecourt was branded Total by the early 2000s. The site was then purchased by Shell in 2012 who refurbished the site with new pumps and tanks as well as rebranding the shop to their own brand Select and removing the jet wash.

The forecourt shop was refurbished again in early 2018, gaining Budgens branding in the process.

The car wash was removed in 2020 to make way for two Shell Recharge electric vehicle charging points. These were due to go live in 2021 but this was delayed until summer 2022 due to power supply issues.