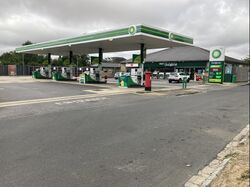 A Budgens store within a petrol station.

Budgens is a convenience store chain owned by Booker Group, which is itself now owned by Tesco.

Budgens store tend to be very similar to Londis, but are bigger with more of a supermarket style.

The number of stores attached to the forecourts was increased while they were owned by Musgrave. Some of these had been branded 'Xpress Budgens', a legacy of Budgens replacing the 7-Eleven chain.

More recently, Booker partnered with MFG to roll Budgens out across many of their filling stations.

Budgens On The Motorway

Budgens was briefly introduced to Blackburn with Darwen services in 2016, where it filled a unit that had been previously occupied by Co-op Food. This closed in 2017.

Welcome Break's new Newark site will include a Budgens store. This is a result of their new parent company's relationship with Booker. While the Newark site isn't on a motorway, there is the potential that more locations could eventually be opened.

Budgens can be found at the following A-road service areas:

Budgens has been removed from the following signposted service areas: