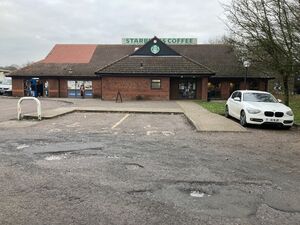 The former site of three different Little Chefs, at the northern end of the Hailsham Bypass.

Parking and use of the forecourt is limited to 20 minutes maximum stay for all vehicles and is strictly enforced by Euro Car Parks. 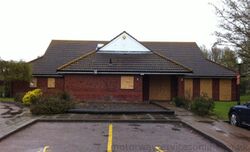 The roundabout was built in the 1950s. At the position of the service area was an RAC service centre, possibly taking advantage of a short stub of road which had been provided in case New North Street would ever become a dual carriageway.

In around 1974, Little Chef opened their Lower Dicker branch a little further up the A22 from Boship roundabout after taking over Bill's Transport Café. In the 1980s, their rivals Happy Eater also acquired The Country Fox/The Old Orchard restaurant, slightly further up at Golden Cross.

By 1987, Forte owned both brands and they and Action 2000 started looking at building a new service area at the Boship Roundabout. The original plan included a 120-seater restaurant with a children's play area, filling station and 20-bed hotel along with a picnic area.

The site opened in around 1990 as a large Happy Eater and Travelodge, next to a petrol station and tourist information centre. At the same time, Little Chef moved into the old Happy Eater at Golden Cross (known as the Hailsham branch), and the old Little Chef closed and was replaced with houses.

In 1996 all Happy Eaters became Little Chefs, so the one at Boship became the Hellingly branch. Its large building gained a Burger King and the two restaurants competed until 2000 when the oldest one closed, to become a car centre.

The tourist information centre closed in the mid-2000s and went onto become a contact centre for a builders firm.

Throughout the 2000s the filling station was branded Total. In October 2006, Total were granted planning permission to redevelop the forecourt. These plans were amended over the next two years with work commencing on the redevelopment in late 2008. The site reopened with a new, much larger sales building with Total's Bonjour branding along with new pumps, canopy and car and jet washes.

In January 2012, the Little Chef was the one of the 67 sites identified as underperforming by R Capital and the site was closed. The site was then converted to a Starbucks store reopening on 13 April 2013.

In 2018, Euro Garages added a Greggs store next to the Starbucks café occupying the former Burger King space. The filling station store was also rebranded from Shell's own Select to Budgens in the same year.