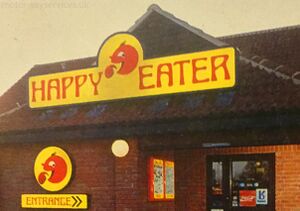 Happy Eater was a family restaurant chain which became a common sight in the 1980s, especially in southern England. It was known for its distinctive yellow branding, animal-shaped outdoor play areas and its slightly unwell-looking red mascot.

Forte considered Happy Eater to be the most upmarket roadside brand they owned. The Happy Eaters were more spacious than their siblings at Little Chef, they had better play areas and they had separate kitchens. Each restaurant had a yellow theme, with yellow light shades hanging from the roof and yellow Formica tables, with bright red plastic edging and steel legs.

Childrens' caps and badges were provided saying "I'm a Happy Eater", as well as Lego and games. A cassette called Mr Happy's Fun Tape was sold in partnership with Chessington Zoo. Parents Magazine declared Happy Eater the best restaurant chain for families in 1983.

Happy Eaters were especially busy on Sundays, as families would head out of town for the day. On weekdays the trade came mostly from businessmen. Meals included the 'Happy Eater Fast Fry', 'Bangerbake' and fish and chips, while children's meals included 'Dog's Delight', 'Little Porkers' and 'Mr Happy's Ice Cream'.

In 1991, the brand came to be associated with then-Prime Minister John Major, who was seen dining at one while on his way to a speech and reportedly visited regularly.

Much has been said about Happy Eater's unfortunate logo. It was actually redrawn in 1993 to remove the hand (example), but by then most branches had already closed. 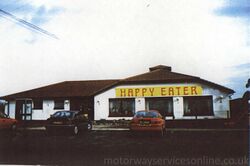 Happy Eater was set up in 1972 by Michael Pickard, who left Trust Houses when they merged with Forte. The company was owned by Courage Brewery, itself owned by the Imperial Group, with Happy Eater being based at 'Pickard House' in Epsom. The first branch opened in Ripley in May 1973.

Michael Pickard was later joined by former Trust Houses colleague Allen Jones, who had previously set up Welcome Break Family Restaurant. It was initially decided that Happy Eater would focus on the south east while Welcome Break remained in the south west, but by 1978 any Welcome Breaks that weren't re-branded had been closed. The new company opened up franchising opportunities, and said they were targetting "High Streets, shopping centres and main roads in the southern half of England".

"We're not only creating an industry but a profession."
Sandy Ross, Commercial Director, 1985

By 1980, Happy Eater had 21 restaurants. These mostly used existing pubs and cafés, usually next to a petrol station. Their policy was to look for "a straight road approach, easy access and good parking".

At this point Happy Eater began to scale up their operation, with a standard building design that could be constructed quickly, and a partnership with Esso that helped them find new locations, but all were aiming for the same user experience. More bright yellow colours were introduced. Most sites were now leased from a garage or petrol station; a few were owned and one was franchised.

The number of restaurants had grown to 85 before Imperial Group were acquired by Hanson Trust in 1986, which sold its hospitality chains to Trusthouse Forte that August. Forte ended a few projects they thought would be unprofitable, including a planned Happy Eater video game - that was later launched under another brand, 'Dizzy'. In general Forte approved of Happy Eater, noting its careful site selection and long opening hours. They wanted to expand it to 200 branches, treating it as the middle ground between their Little Chef and Harvester brands.

A report found that the average spend on a meal in 1986 was £3, with their hamburgers priced at £2.75, a meal they encouraged visitors to try as it was becoming "increasingly popular". During the two takeovers, Allen Jones and Jane Pickard left Imperial Group and went on to form a similar chain, AJ's.

With Forte already owning 220 Little Chef restaurants, the Monopoly and Mergers Commission were called in to investigate their purchase of Happy Eater. This concluded that the takeover was no threat to the public interest, as new restaurants could still enter the industry.

Forte developed Happy Eater as their more upmarket brand, introducing a new styling in May 1989 which was much less formal, offering customers a variety of seating including stools and sofas, known as the Mark II era. This was trialled at Peterborough and Colsterworth. By contrast, Little Chef was a more 'common man's' brand, and one that Forte appeared to prioritise.

Trusthouse Forte were bought by Granada in 1995, who said both Happy Eater and Little Chef were "tired". Granada believed in the power of a strong brand and economies of scale, and decided that there should be one roadside restaurant chain that they would promote relentlessly. They decided this would be Little Chef, and all the Happy Eaters were immediately converted to Little Chefs.

This meant there was now an over-saturation of Little Chef restaurants, including some branches that had been originally intended to compete with each other. This eventually led to a mass-closure of restaurants. 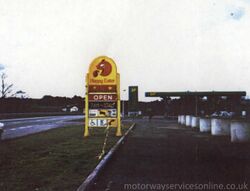 A chain of restaurants in Mauritius now operates under the 'Happy Eater' name, with a very similar logo. They say they were founded in 1996.

The rights to the Happy Eater name in the UK are now owned by Kout Food Group in Kuwait, following the liquidation of their subsidiary, which had been dedicated to monetising the Little Chef and Happy Eater brands. Note that this did not necessarily mean they were seeking to open new restaurants, but that they may not have turned down an opportunity if one arose. It's not clear what the current owner's intentions are, beyond protecting their intellectual property.

Happy Eater's early days was stated as one of the inspirations for the restaurant chain Brightside, which launched in February 2023.

Note that the branch numbering was not always consecutive, or consistent. In the Forte era, some planned Little Chefs and Happy Eaters were swapped around as construction started, causing confusion in the historical records: we believe our list is an accurate record of what actually opened as a Happy Eater.

Where further information is available on the service area, you can tap its name for details.